It’s always a pain when an ad isn’t worthy of what’s being advertised. Which is why seeing this spot from Monzo the other day felt like a particularly hard kick to the stomach.

Here’s why I’m about to be highly dramatic and over-critical about a tiny poster on a train. Monzo is the bank that has basically changed my life since switched my main current account there last year, due to its extreme convenience - all in the app! - instant spending updates and very cute “hot coral”-coloured card. And also, the fact that each real-time spending notification comes accompanied by an appropriate emoji. 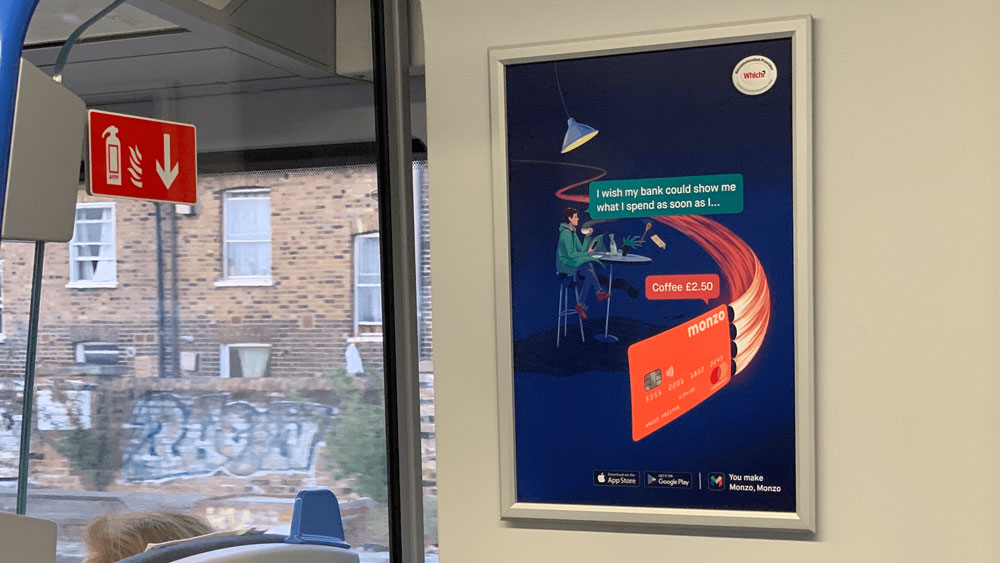 It wasn’t this actual ad (I scooped the photo from Monzo’s product forums), but it was pretty much the same. Starting with that horrible tagline - “You make Monzo, Monzo” - with its redundant comma and pointless repetition with those gummy, mumbly Ms and Zs! Continuing with the clichéd graphic design, featuring a tiny illegible figure moored in acres of dingy blue space. Also, where has the giant card come from, and why is it talking out of its magnetic strip? The whole picture’s a mess.

Monzo, you are so much better than this! Through its great product, Monzo has rendered so many of my previously awkward interactions, from splitting the bill at a restaurant to transferring money into a savings account, frictionless, easy - even weirdly joyful. Also, my hot coral card is simply a delight to look at. Basically, Monzo’s done everything right by me so far, and I can’t bear to see it do wrong.

I first heard about Monzo the way most people did - through word of mouth. But managing growth on word of mouth alone leads to a smallish coterie of hardcore fans, not mass adoption. And maintaining a coterie of hyper-loyal fans at the expense of shoving your brand in the faces of people everywhere is a route to business failure - read your Byron Sharp!

So, as a privately-owned startup with an eye on a public listing, which is also burning through money at a frightening rate, Monzo needs to get a lot more people flashing the hot coral - and fast. Which is why it has a publicly-stated target of more than doubling its user base to 3.5 million customers by the end of the year. (Currently, users are growing at a rate of 100,000 a month.)

So it’s hired an agency for a big brand campaign. Obviously. I’ve worked in the industry for long enough to know that nobody but an ad agency could have come up with THAT train wreck of a tagline. Presumably these poster ads are a precursor to a big above-the-line effort. According to this story in Marketing Week, the online bank now had a has boosted its marketing staff to 20, up from six a few months ago. It’s aiming beyond digitally-savvy, younger, wealthier city-dwellers.

These terrible new Tube ads isn’t virgin territory for Monzo. It piloted a separate poster campaign late in 2018. This first Tube burst was discussed at Monzo’s open office meeting a month or so back… which I was at. I told you I was a fan.

On hand to present were Harry Ashbridge, a Monzo copywriter, and designer Jacqui Browne. Neither would describe themselves as paid marketers, though - instead focusing on their work on things like the visuals that go out in their internal communications (like emails). Of the 2018 round of Tube ads, “it was an MVP version of a paid marketing campaign,” Browne said. “Just like we launch new features on the app.”

For the burst, Monzo ran 6,600 Tube ads in total during a week or so in late October. They were bought on discount.

That said, there’s an expectation for this MVP to lead somewhere big. As Ashbridge put it, “a big part of what we are doing this year [is] being out there in the world. Being on TV - being on the side of a bus - the medium is the message. That helps show that we are serious.” 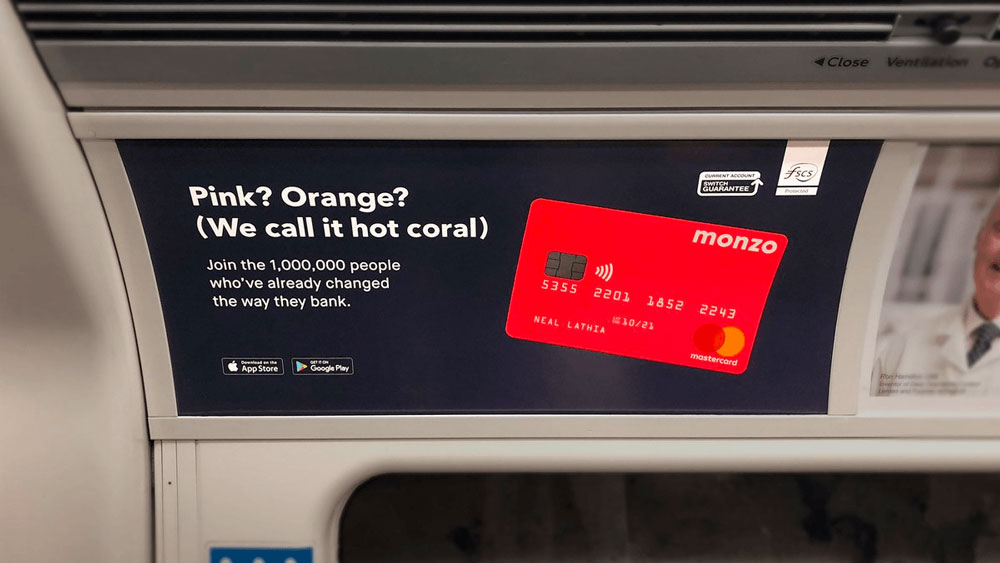 Both speakers at the event presented the burst as a pure experiment to find out about how advertising works. One of the ads, pictured above, aimed at boosting brand recognition: as Browne said, “we were basically saying, isn’t it a nice hot coral card!”

Another ad in the campaign (pictured below) was based around the behavioural economics concept of “social proof” - basically, lots of people are doing a thing, so it’s safe for me to do that thing too.

Ashbridge said that the nature of Monzo’s product, which can only be accessed via an app, rather than a website, let alone a physical branch, led to issues with trust and credibility for the types of not particularly tech savvy people the company needed to reach. Meaning social proof was needed. 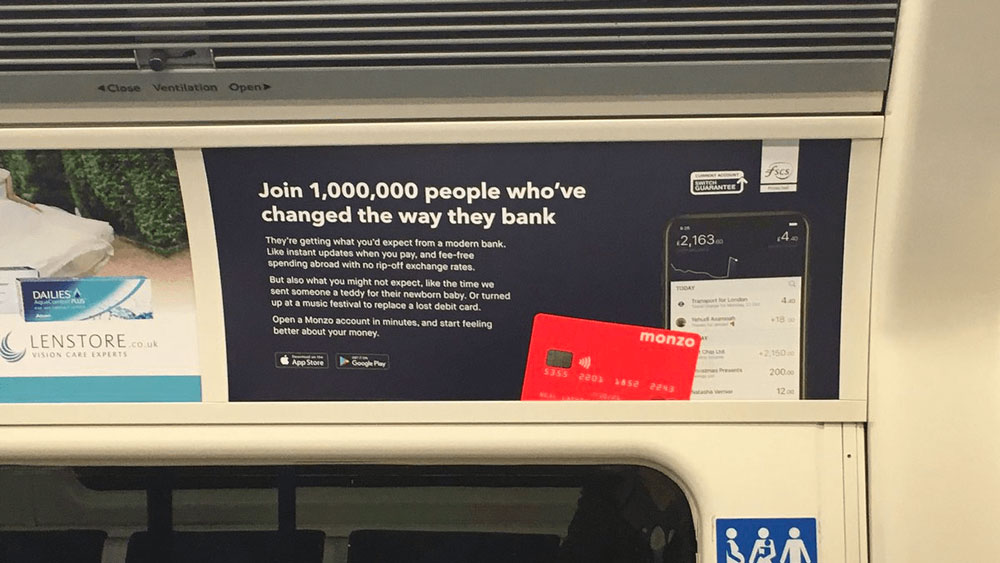 The ads themselves were knocked up in-house, and the initial user research group was the company’s internal Slack channels. Later, they tested the posters with an online survey of 250 people and some “guerrilla testing” next to Monzo’s London office, showing initial mock-ups to passers-by.

They iterated by adding a number and details to the card, including an FSCS deposit protection logo (to heighten brand trust). For the behavioural economics-inspired ad, they kept the long copy: as Ashbridge pointed out, “people on the Tube are a captive audience”, with time to read.

Neither Ashbridge or Browne shared specific results from the round of testing, other than account signups were “higher than usual” in London around the time the ads went up on the Tube.

Reading between the lines, not the kind of results that can boost Monzo users from 1m to 3.5m in a matter of months. So here comes an agency-conceived brand campaign, that will, it seems likely, roll out soon to radio, perhaps even TV - the ultimate brand-building channel.

Both presenters were reluctant to call themselves marketers, or to portray Monzo as a traditional advertiser. “We are looking for something bigger,” Browne said. “But word of mouth is still working pretty well. A lot of this is still testing. We are still exploring around.” Ashbridge added: “it’s terrifying deciding what our brand comms strategy will be. Coming up with campaign messages. We don’t have our brand positioning written down anywhere!”

But at other times in their presentation, the reluctant Monzo marketers did Byron Sharp proud. For one thing, they suggested that close targeting and tailored messages don’t work over the long term. “As a writer, I don’t think about a target demographic,” Ashbridge said. “Footballers bank at Coutt’s” - the Queen’s bank, targeted at high-income users - “[and] the more you target, the more you are tempted to approach different groups of people with different messages. Our app is the same app for everybody!”

Ultimately, the way that the Monzo marketers talked about their brand at that open office meeting makes me hopeful that - despite this bad above-the-line campaign - the company is in it for the long haul, and can continue to grow.

“We don’t have a brand team - brand isn’t a thing that belongs to a team,” Ashbridge said. “It’s a thing that lives and breathes everywhere. it isn’t something you can easily define. I am militant about us not thinking about our brand as if it’s a thing that’s over there, and our product is over here. Our Ts & Cs are our brand. The entire experience is our brand.”

Wise words. I really wish they’d sort out their tagline before they go to TV, though.