I’d arrived in Trieste on a Friday evening, and, having dropped my backpack off, I needed to walk. So I set off, towards the sea.

Despite being a Friday, there was almost nobody about. The large, square Hapsburg buildings loomed for block after block at each intersection. 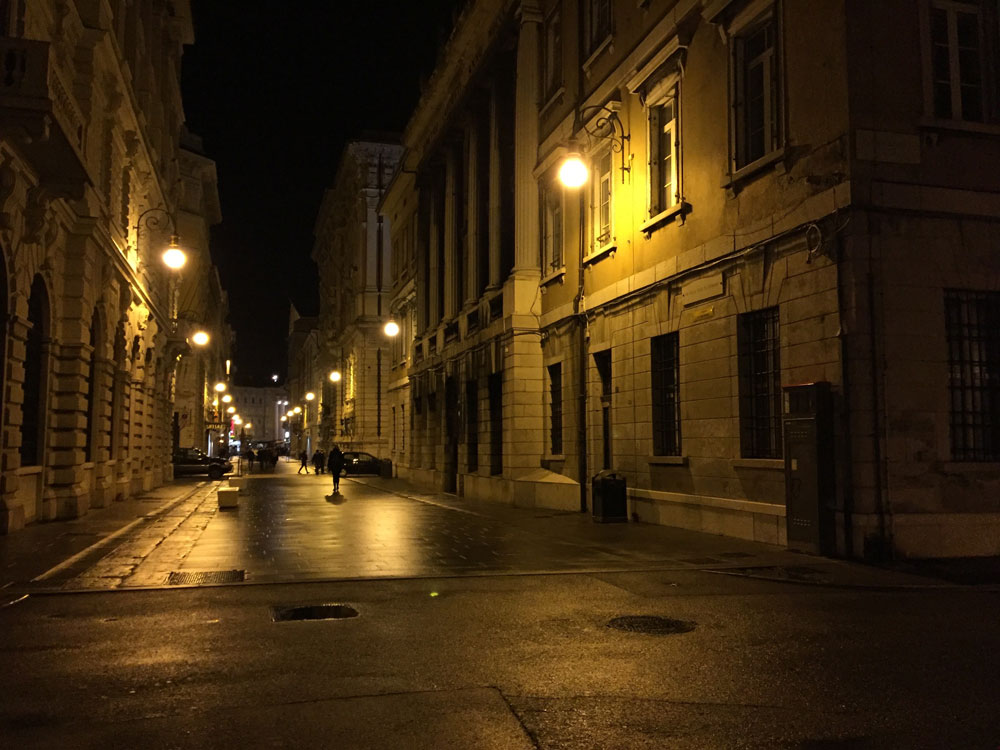 Trieste had been the Austro-Hungarian empire’s biggest seaport, a place of huge grandeur and wealth. Then, one imperial power had been replaced by another: Italian troops marched in at the end of the First World War, and had never left. Commercial activity quieted down. The city’s huge Jewish community was decimated. And resources and sea trade migrated further up the coast.

Which all meant that, today, the city’s grand buildings and squares, built in its imperial heyday, now seem far too big and imposing for its wide, empty streets. 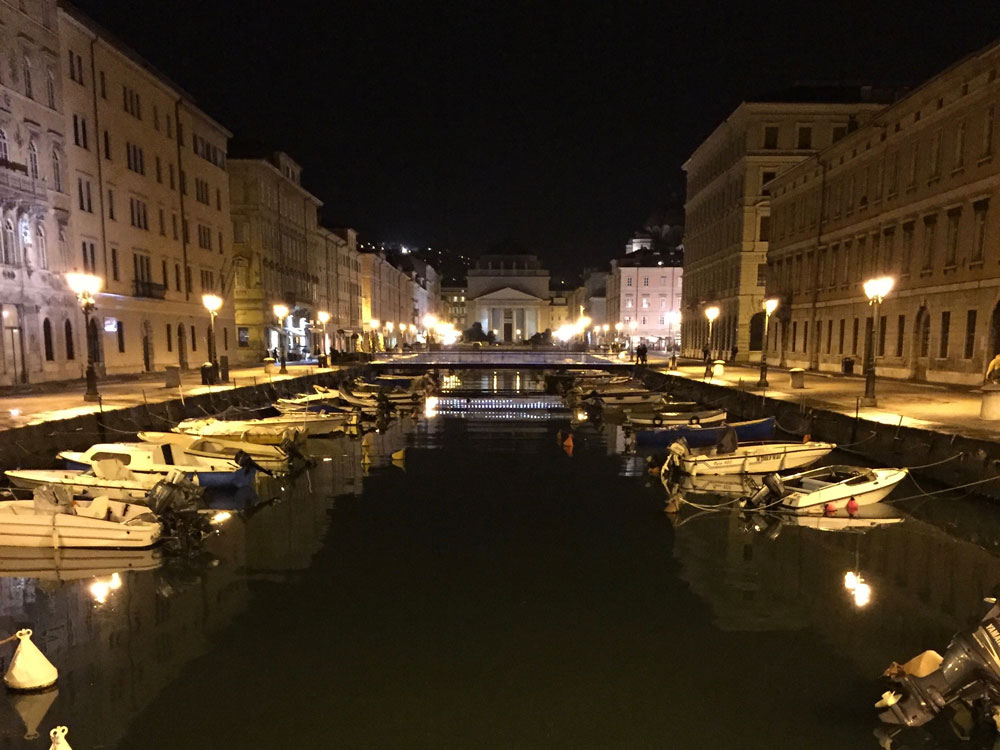 The city’s canal is a tiny inlet really, and totally still. The overblown Neoclassical church of Sant’Antonio Nuovo squatted in the distance.

Along the seafront, the coast curled around me: a lighthouse spun slowly up a hill to my right, west, back along the Italian coast; to my left, towards the Slovenian border, a harbour jutted out, the sea-cranes standing watchful and still above the city lights’ reflections. 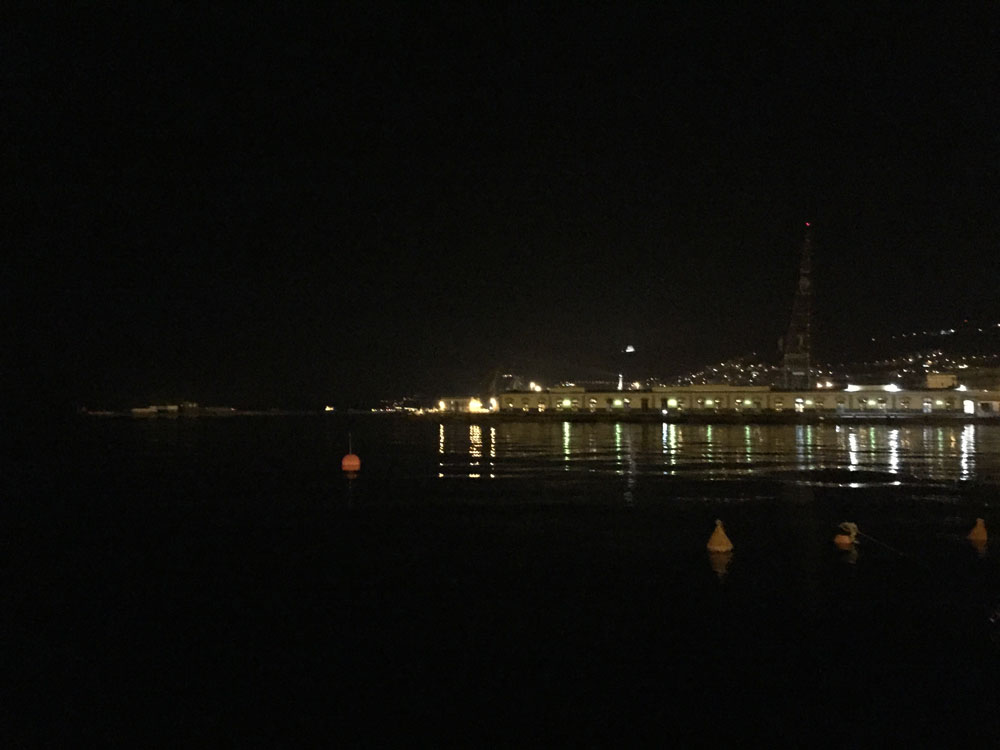 I walked to the end of the Molo Audace, a square, flat stone pier, flanked with elegant street lamps. A couple of couples of teens held hands and kissed, in between bouts of looking out to sea. They were almost the first Triestines I’d seen on my walk.

Back inland, and through the Piazza Unitá, the main square. There were a few cafés around its east and west sides, including an outpost of Harry’s Bar. Most of the patrons were huddled inside, though it wasn’t anything like as cold as February in London.

An EU flag flopped against the town hall’s Baroque-style façade. Though actually it was built in the late 19th century, and the rear of the building was as bare of ornament as the dingiest council tower block back home. 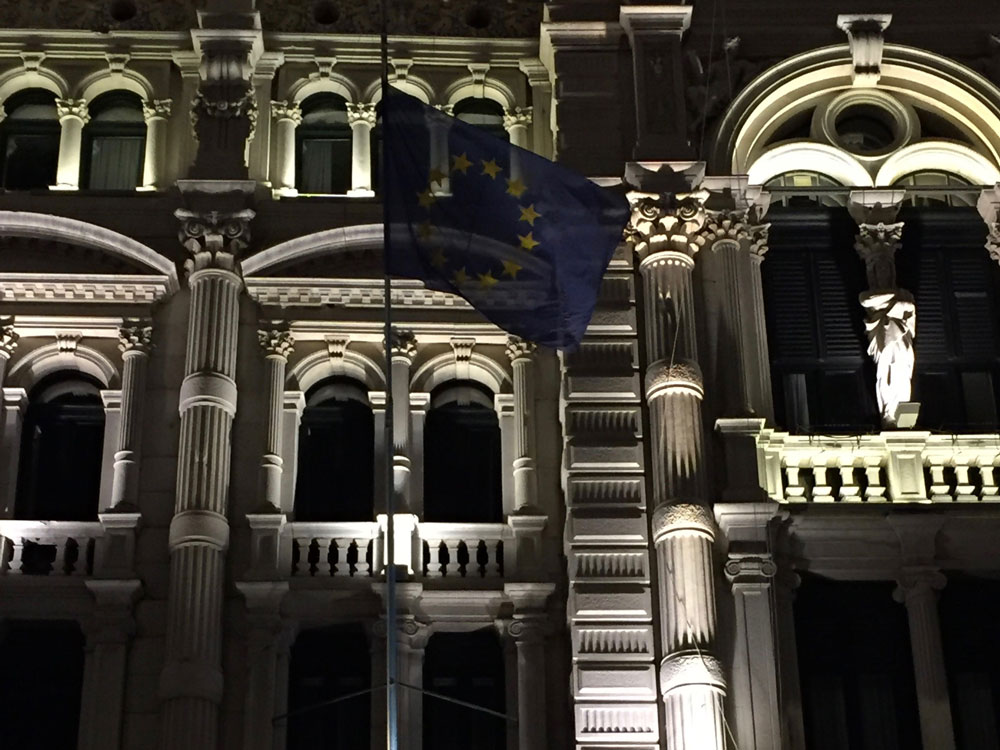 In the small square outside the stock exchange, a mysterious sign: FREE TERRITORY OF TRIESTE. USA UK COME BACK. It had started to rain. 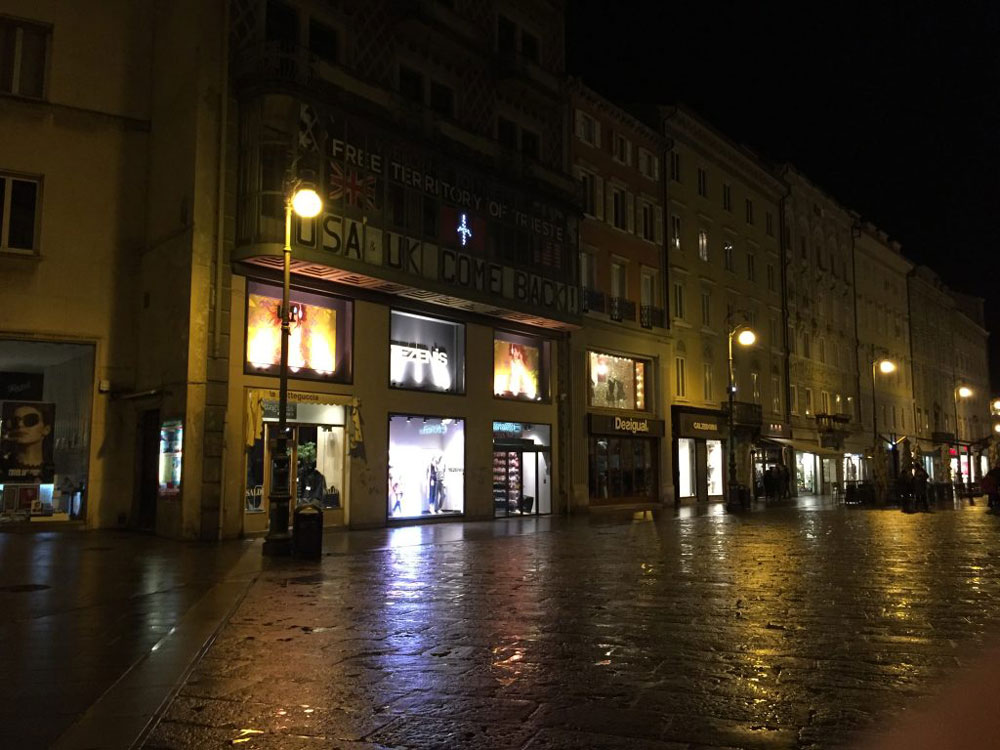 Inland and up the hill to the old town and ghetto. I had first seen the word TRIESTE at the end of Joyce’s Ulysses, which I read when I was at university. After Molly Bloom’s final soliloquy, there was one more tantilising, final, line: “Trieste–Zurich–Paris, 1914-1921″. It seemed to me intoxicatingly cosmopolitan to have lived in so many places. It still does. Even if all of those destinations are now just a low-cost flight or even train ride away.

The entrance to the Hotel James Joyce, in the old town, is just through a Roman arch, one last relic of the city’s original, imperial roots. The twisting, narrow streets, built later, still pre-date the arrival of the Austrians. 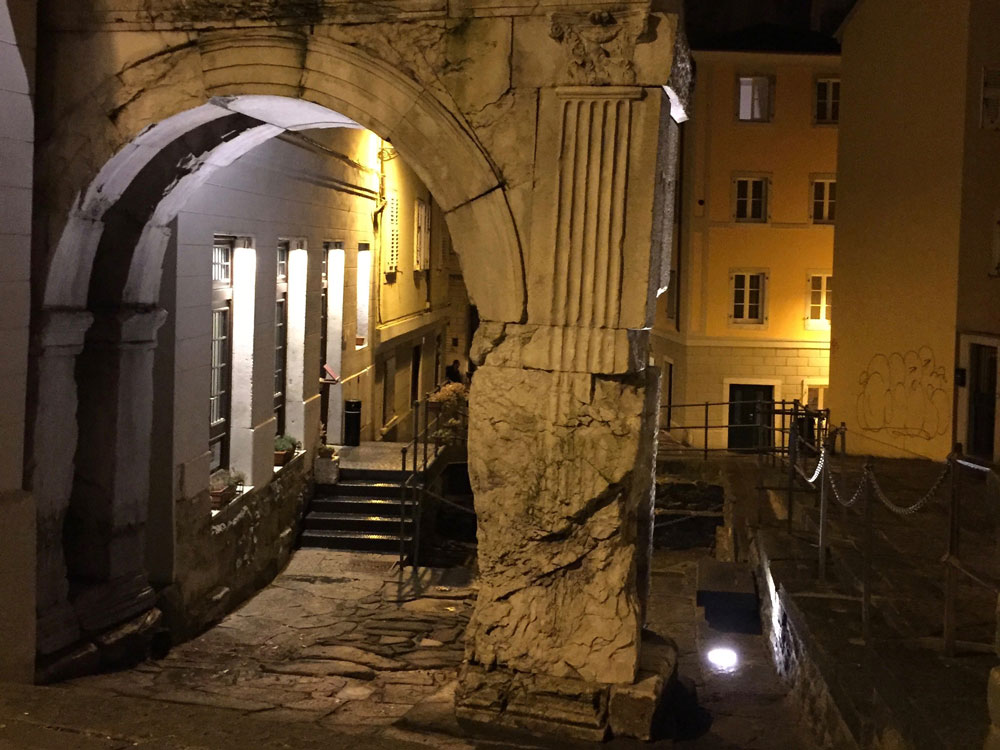 The Ryanair flight in, one of two flights to Trieste from Stansted a week, was chock full. Almost everyone was from Slovenia, and went straight to the tiny airport’s coach and car park after landing and passport control. 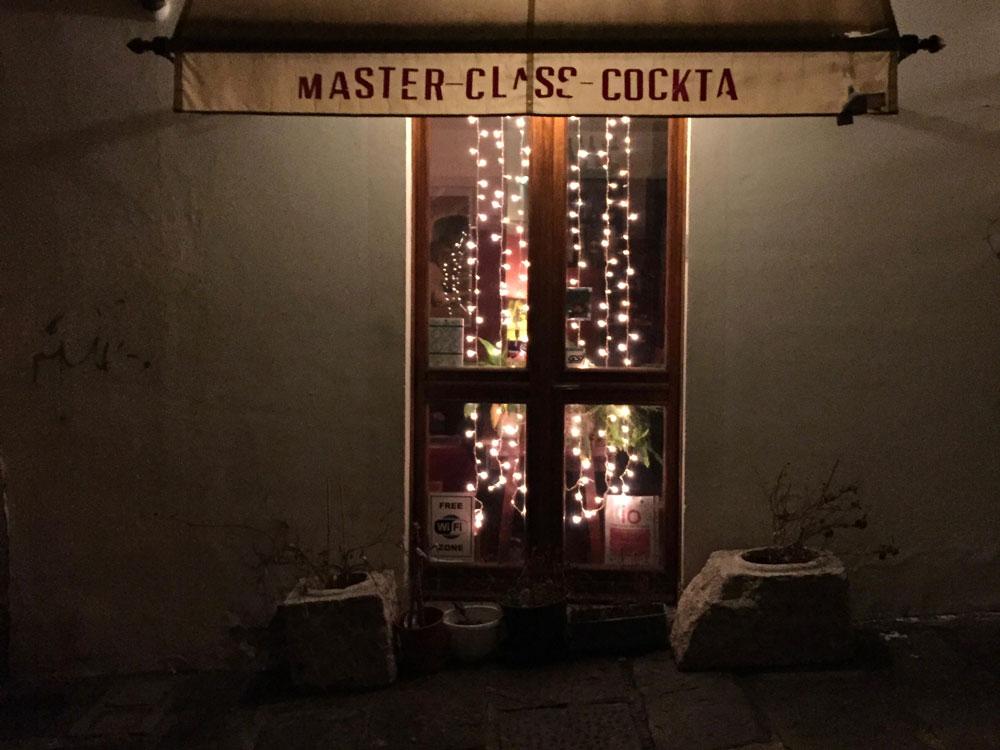 Dotted in among the narrow streets were a few cafés and bars, all fairly full. But, again, nobody outside. Despite the empty, quiet streets, and the feeling of not having much to do, I felt elated rather than sad. Wasn’t this what I wanted?

The idea of coming here hadn’t been from Joyce. It had been from Jan Morris, whose exceptional travel book Trieste and the Meaning of Nowhere I’d read and loved as a student, almost a decade before. I’d picked it up purely for its title containing the magic word: Trieste. Back again, that hope for travel, unfamiliar places, cosmopolitan opportunity. 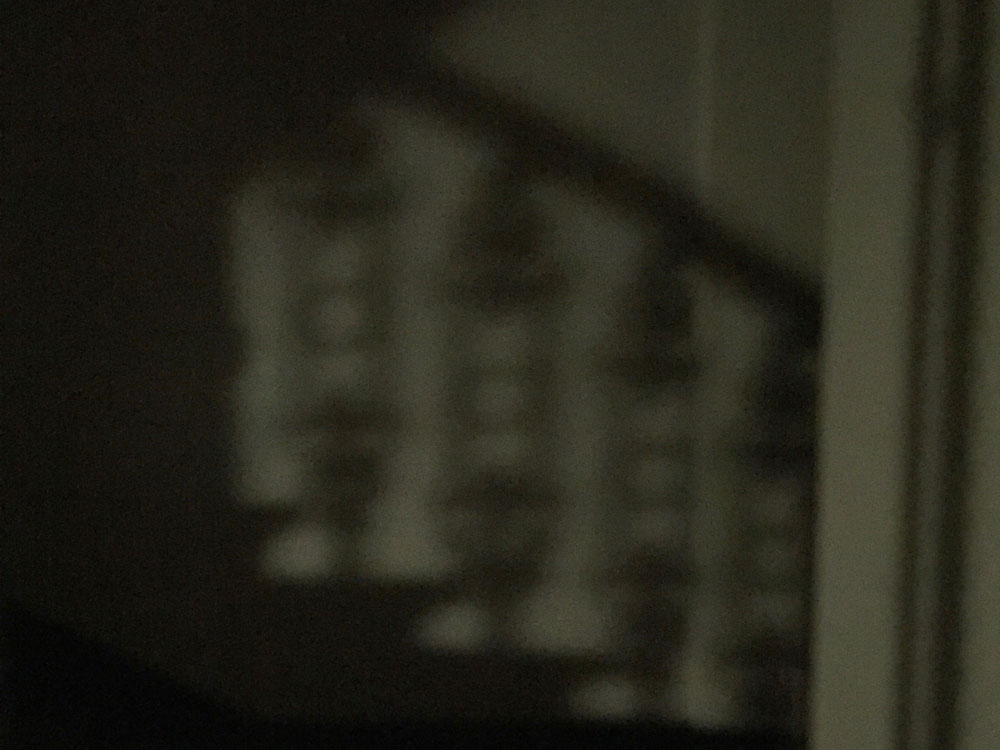 I let myself in to my building. Not finding a light, I climbed up all four flights to my tiny flat. The intricate wrought iron bars of the staircase cast spooky shadows on the walls.

I’d brought a copy of the book with me. In the the introduction, before telling us the city’s story, Morris explained why Trieste meant so much to her. It’s a place beyond place, or between places. It’s limbo. It’s nowhere:

Trieste is an allegory of limbo, in the secular sense of an indefinable hiatus. I feel there are good people around, and an unspecified yearning steals narcotically over me… The allure of lost consequence and faded power is seducing me. I feel that this opaque seaport of my vision, so full of sweet melancholy, illustrates not just my adolescent emotions of the past, but my lifelong preoccupations, too. The Trieste effect, I call it. It is as though I’d been taken, for a brief sententious glimpse, out of time to nowhere.

The next day, before doing some more sightseeing, I retraced my steps. A thick fog had swept in from the sea. 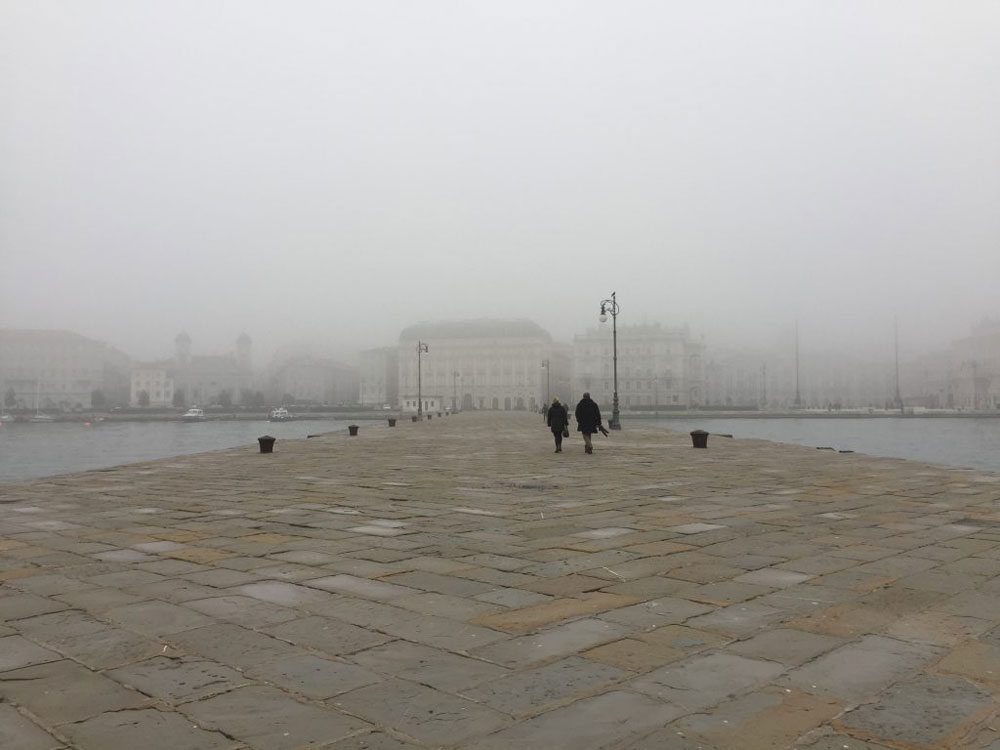 I walked out to the end of the Molo Audace, and turned back inland. The handsome, square Habsburg buildings loomed back at me, out of the fog.

It wasn’t really “sweet melancholy”. More the feeling of getting my first bearings in an unknown, strange place. Somewhere else. Somewhere separate. Somewhere reachable thanks to the miracle of time, low-cost flights, and an unspecified yearning for limbo. Somewhere redolent of lost consequence and faded power, yes, but Somewhere all the same.