I’ve been lucky during this pandemic. I have kept my job, and can work from home, which is safely isolated and peaceful. No close friends or family have caught the virus, symptomatically at least. All of this can change, of course. I pray it doesn’t.

But, four months in, all I can complain about is a cancelled trip to Paris, originally planned for March. Big wow.

My main hobby is visual art (see side project here), so gallery-going is the main focus of my Paris trips. But of course this indoor hobby has been made more difficult in the pandemic. In London, most commercial galleries have now reopened, but they are mainly appointment-only, with reduced opening hours. Visiting was always a bit intimidating and inconvenient, now it’s even more so.

In Paris, these barriers to entry were always even higher. Unlike in London, you generally need to ring a bell or buzzer to gain entry. While most London galleries face on to the street, their counterparts in Paris tend to be upstairs, or through a courtyard (doubling the number of doors to pass through). Which all adds up to a lot of cringe moments, pride-swallowing, and plucking up of courage, for the not-very-good-French speaking visitor.

I’m not complaining though. In a hard, impersonal and closed-off city, the difficulty of gaining entry, and those cringe moments, are worthwhile, counterbalanced by the deep pleasure of viewing what’s inside. Or maybe the compound minor inconveniences that discourage going inside contribute to this pleasure.

Here are 11 Parisian gallery entrances that have drifted into my mind today, for whatever reason. I wonder when, or whether, I’ll see all of them again. For no reason at all, I’ve arranged them in ascending order of accessibility. 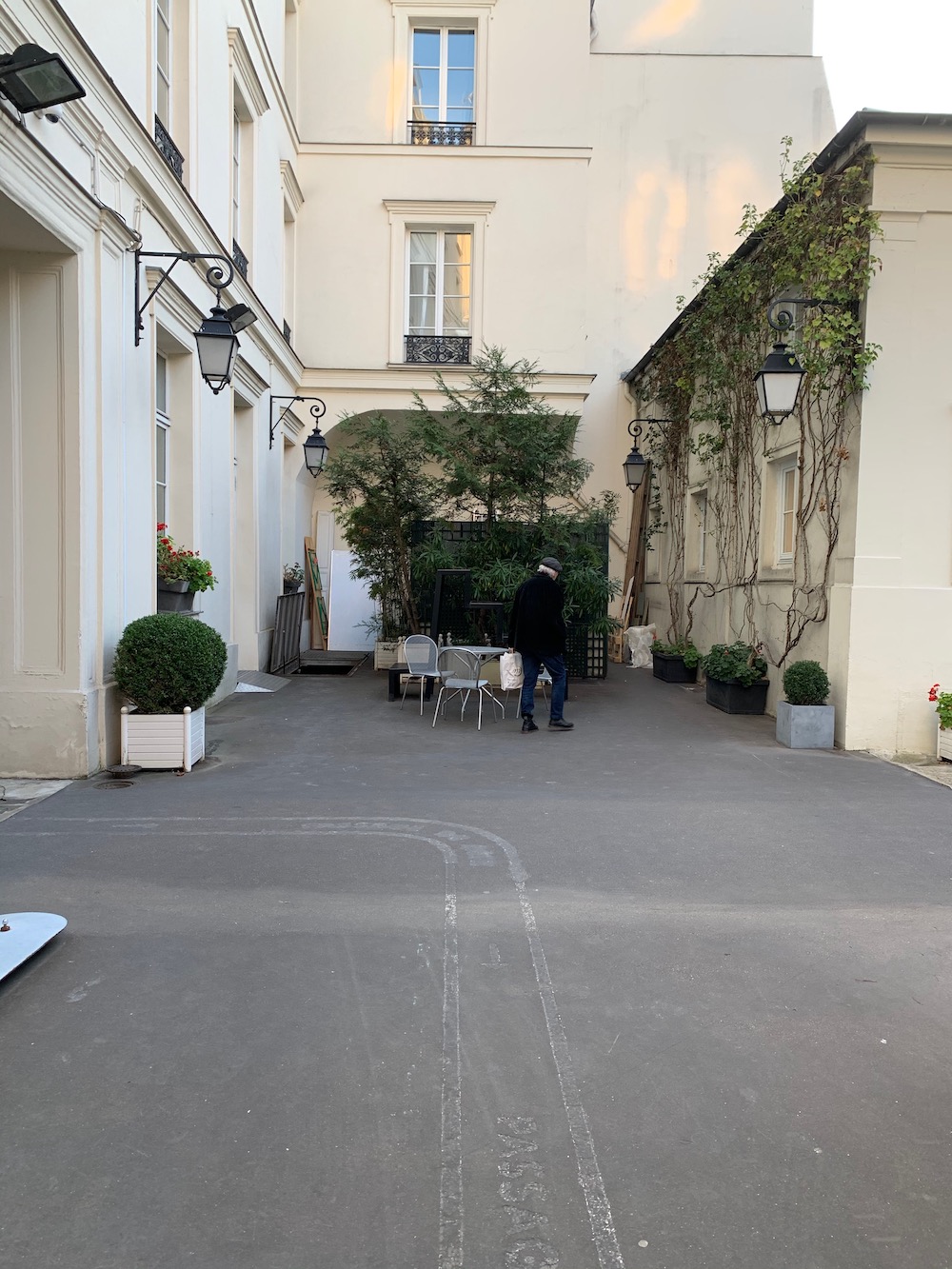 Slap bang in the middle of the main bougie gallery district (the Marais), entrance to this one is pretty straightforward, given that the gallery has given you a line on the ground to follow. This is probably less for the visitor’s convenience though, and more to keep you away from the other buildings, with offices and flats, in the common area in front of the gallery. You don’t want to ring their bells. 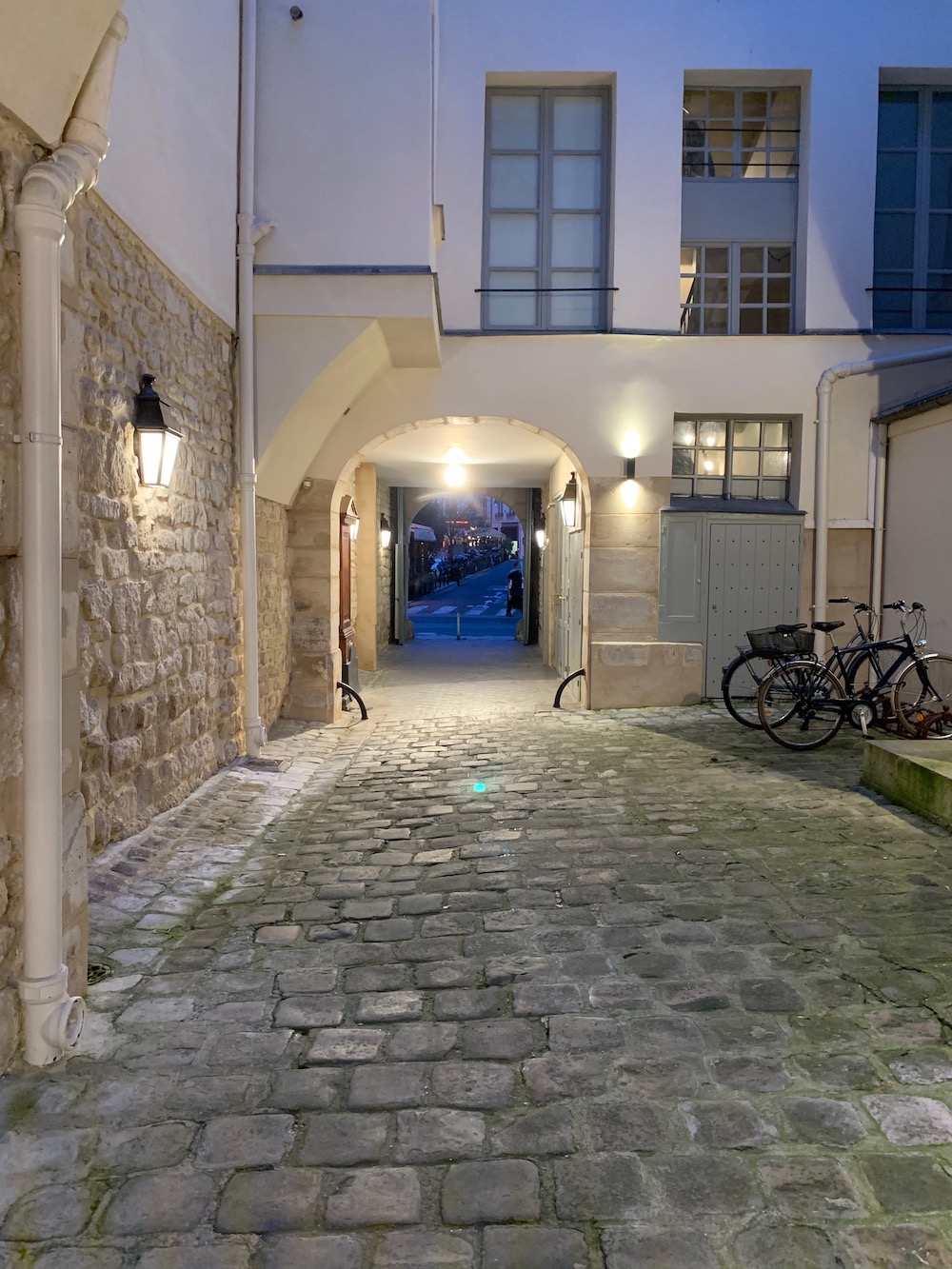 On the Left Bank, a still more bougie gallery district. The outer door to this one is usually open, and to lower the barriers to entry still further, there’s a large flashing VALLOIS sign above the inner door! (Not pictured.) Definitely an entry-level entrance. 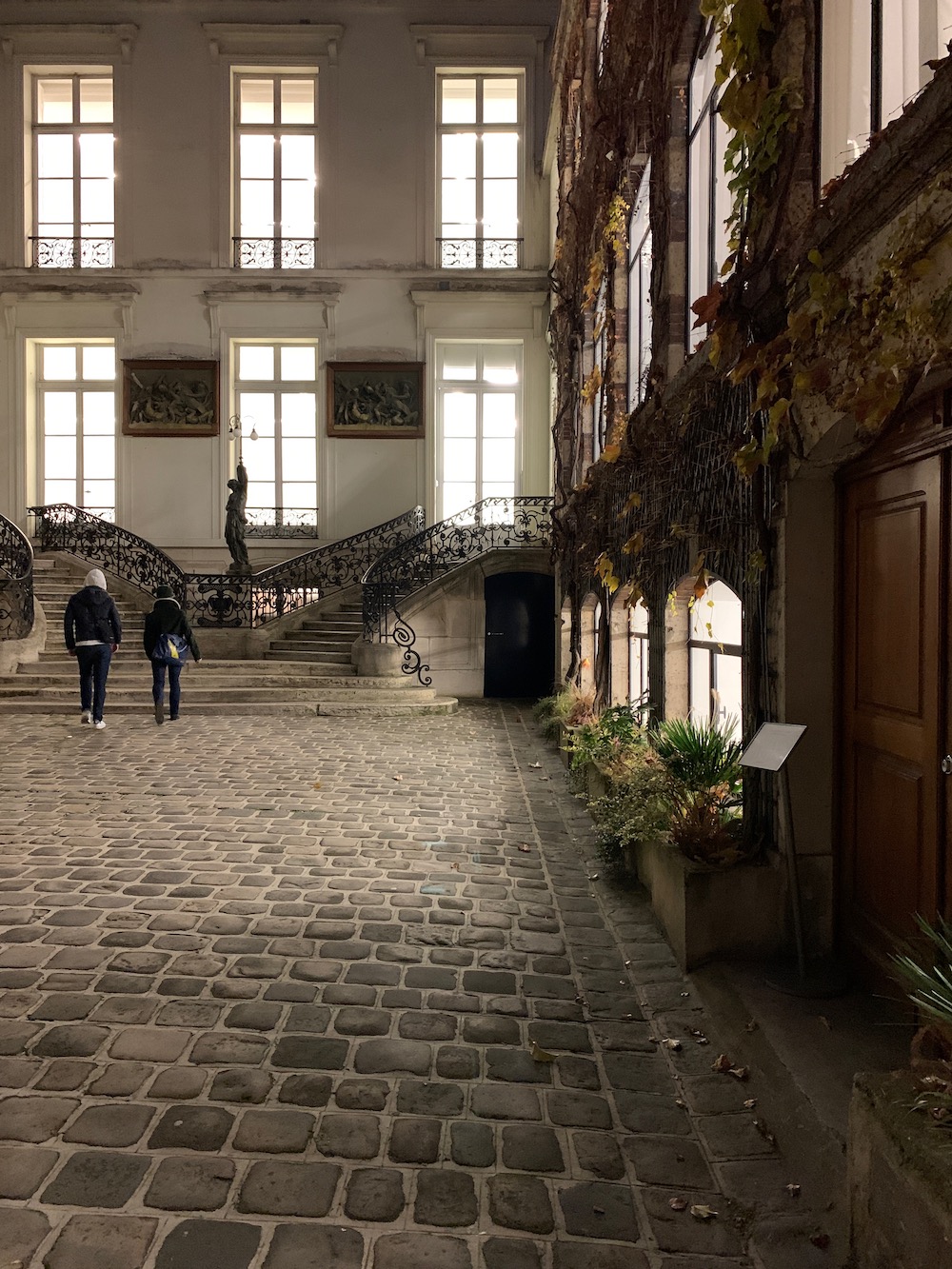 Getting in here follows the standard process. You buzz in to the courtyard on the street, and the gallery is clearly marked on the opposite side of the courtyard. But Perrotin gains extra intimidation points for the courtyard itself being ultra-well kept and pretty. And it also gets a little bonus for hiding an entirely separate gallery building over the road that the visitor only realises is there if they wind their way through the first building and follow some discreet signs. 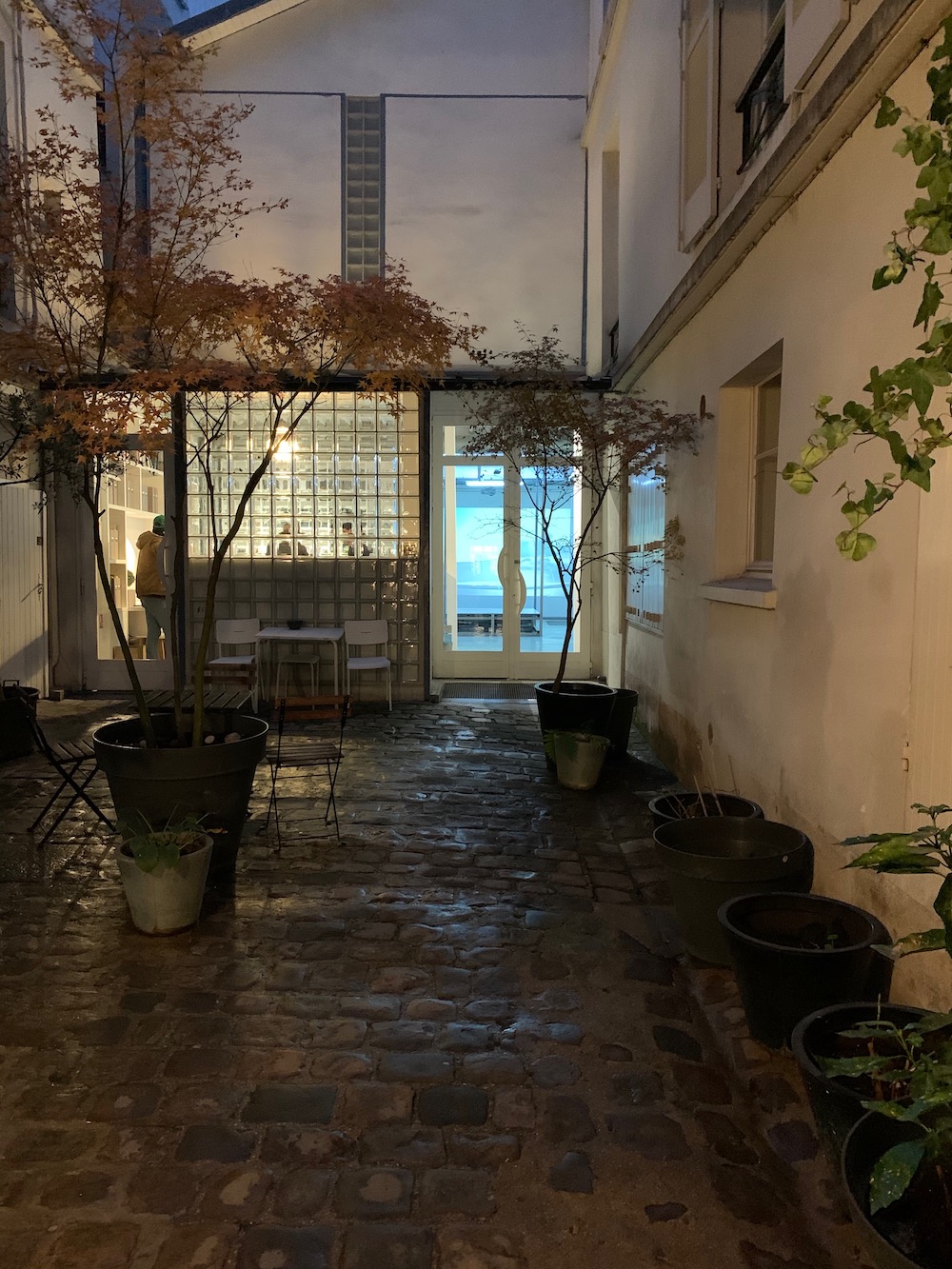 Close to the metro stop of the same name, in a marginally scuzzier area, this gallery gets points for its subtle fuck-yous: note the bumpy cobbles, set off by the sharp step at the threshold to the gallery itself. I have never not tripped on this step, but lucky for me I don’t have mobility problems or I’d have been turned away before I even hit the courtyard. Oh, and don’t come less than an hour before closing or they might have shut it already. This one would be higher ranked, but minor deduction for not having another buzzer on the main door to show the riffraff who’s really in charge here. 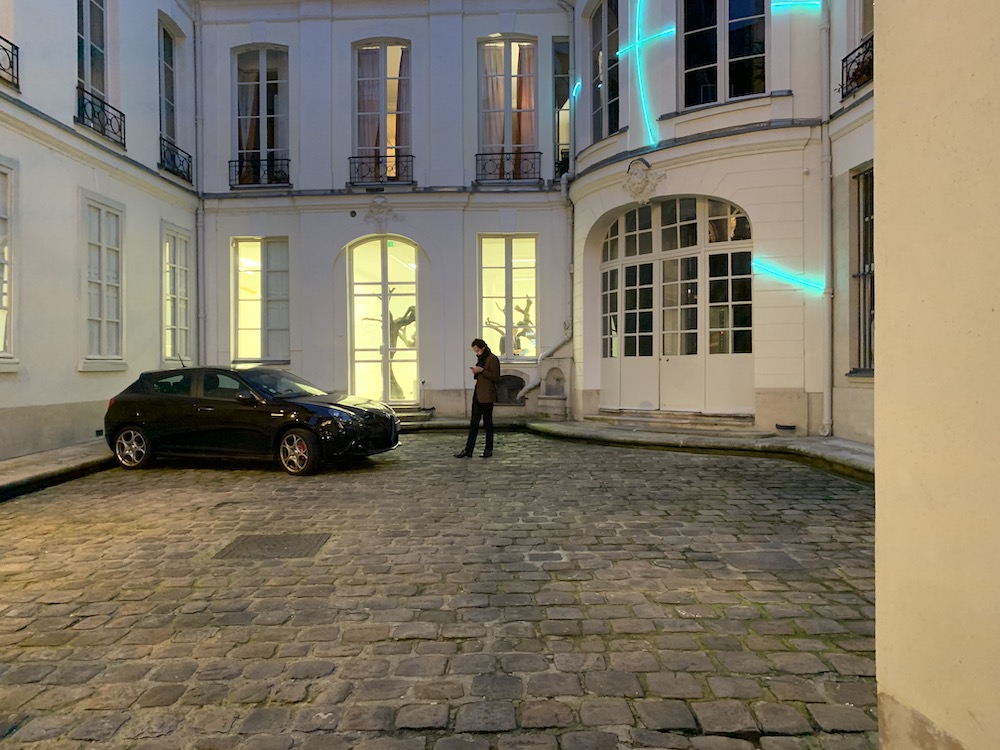 This gallery has two locations on the Left Bank. One directly faces the street (amateurs)! The other, pictured here, has an outer and inner door. Warning! The security guard will look put out if you try to open the inner door yourself: so act like you’re too posh to open your own doors instead, and everyone will feel more comfortable. Half a bonus point for having a smoking gallerist in a complicated scarf lurking outside the door, when I took this photo at least. 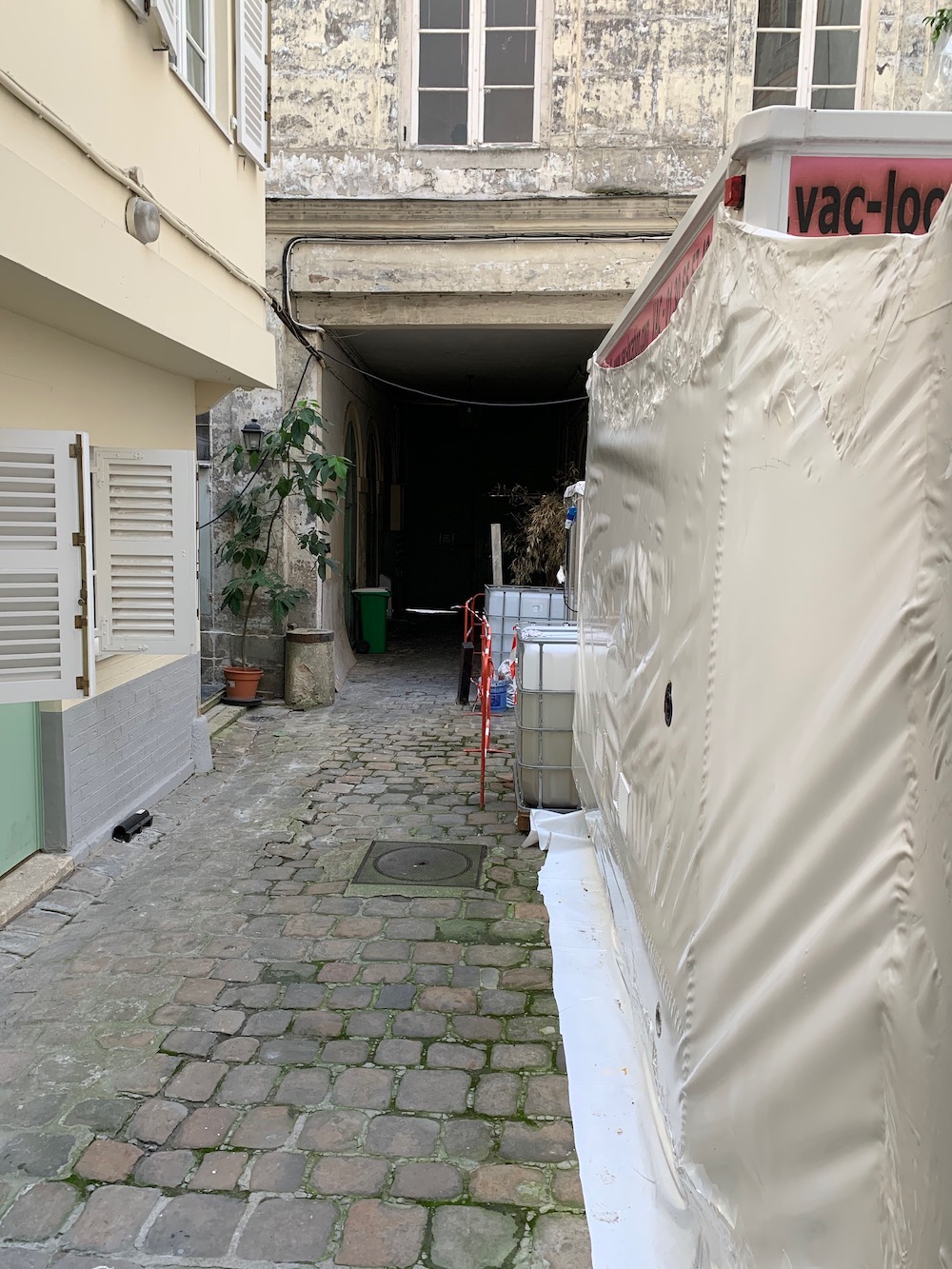 The photo above is deceptive! The doorway in front of me is the one leading back to the street - standard. But, behind me, there are two further doors into the gallery. One push, one pull. One buzzer, one no buzzer. The last couple of times I’ve been here, they have been doing some building works, so the room between doors two and three has been dingy and unlit. This has clearly caused so much confusion that somebody at the gallery has sellotaped instructions on how to get out of the outer door: a remarkably rare concession to making things easier. Not that you can read them very easily in the gloom, though. 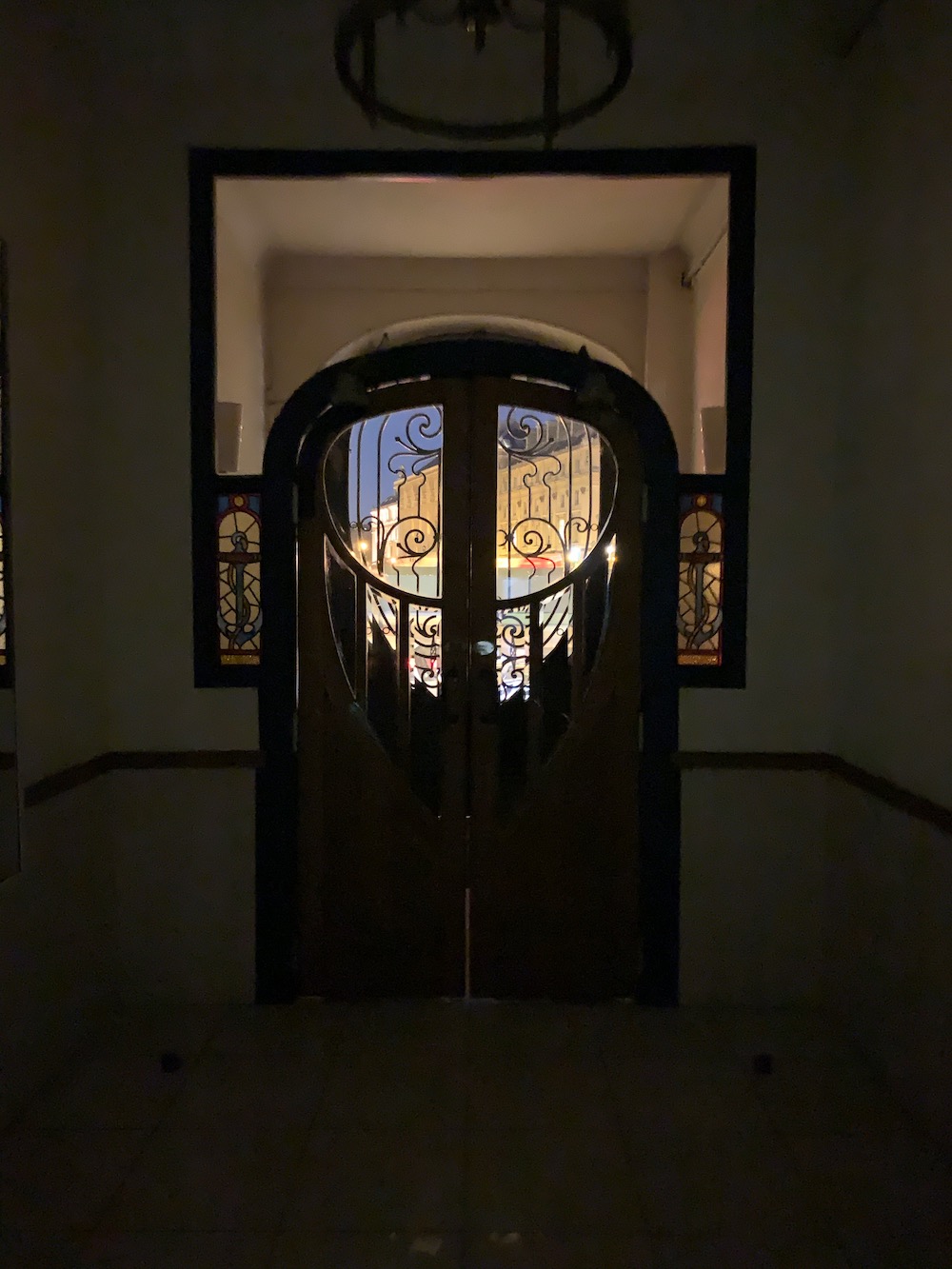 This one directly faces the Seine on the Left Bank, and is in a shared building facing onto a busy road. Which means you can barely hear the tannoy voice over the doorbell buzzer (why would they want a conversation though…?) You need to go through a basically unmarked corridor with several closed doors to find the gallery - add bonus points. But I’m taking one off for the extremely convenient toilet behind one of these doors. 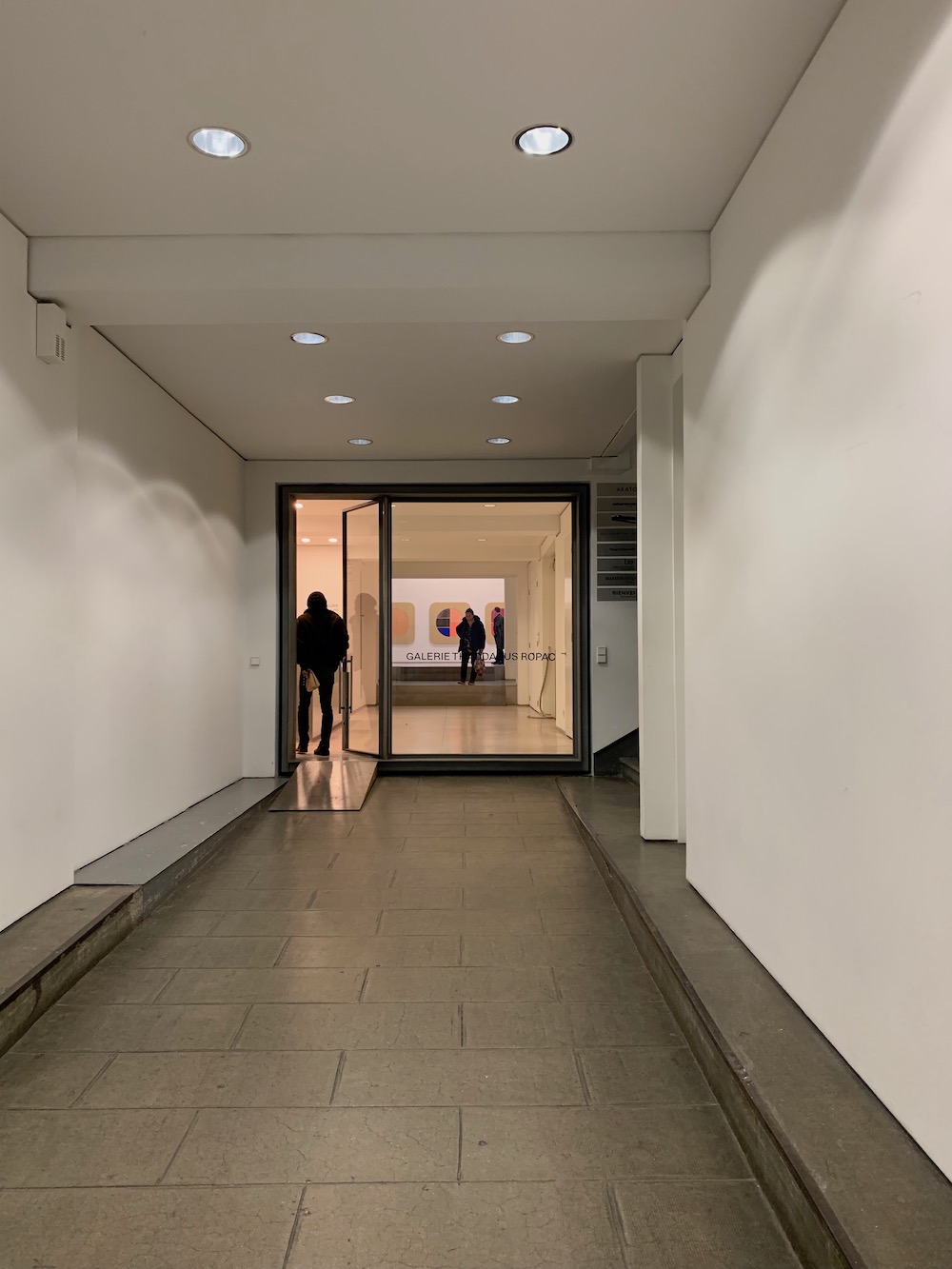 This intensely show-off gallery is a bit lower-key in its Paris Marais location than it is in London (where I once bumped into Victoria Beckham, who looked at me after I did so as if she’d quite like to have me killed). Note there are two doors, but zero doorbells and a wheelchair ramp. Don’t get too comfortable though, that door is going to SLAM behind you if you don’t cushion it, and you’ll get a Posh-level dirty look from behind the reception desk. 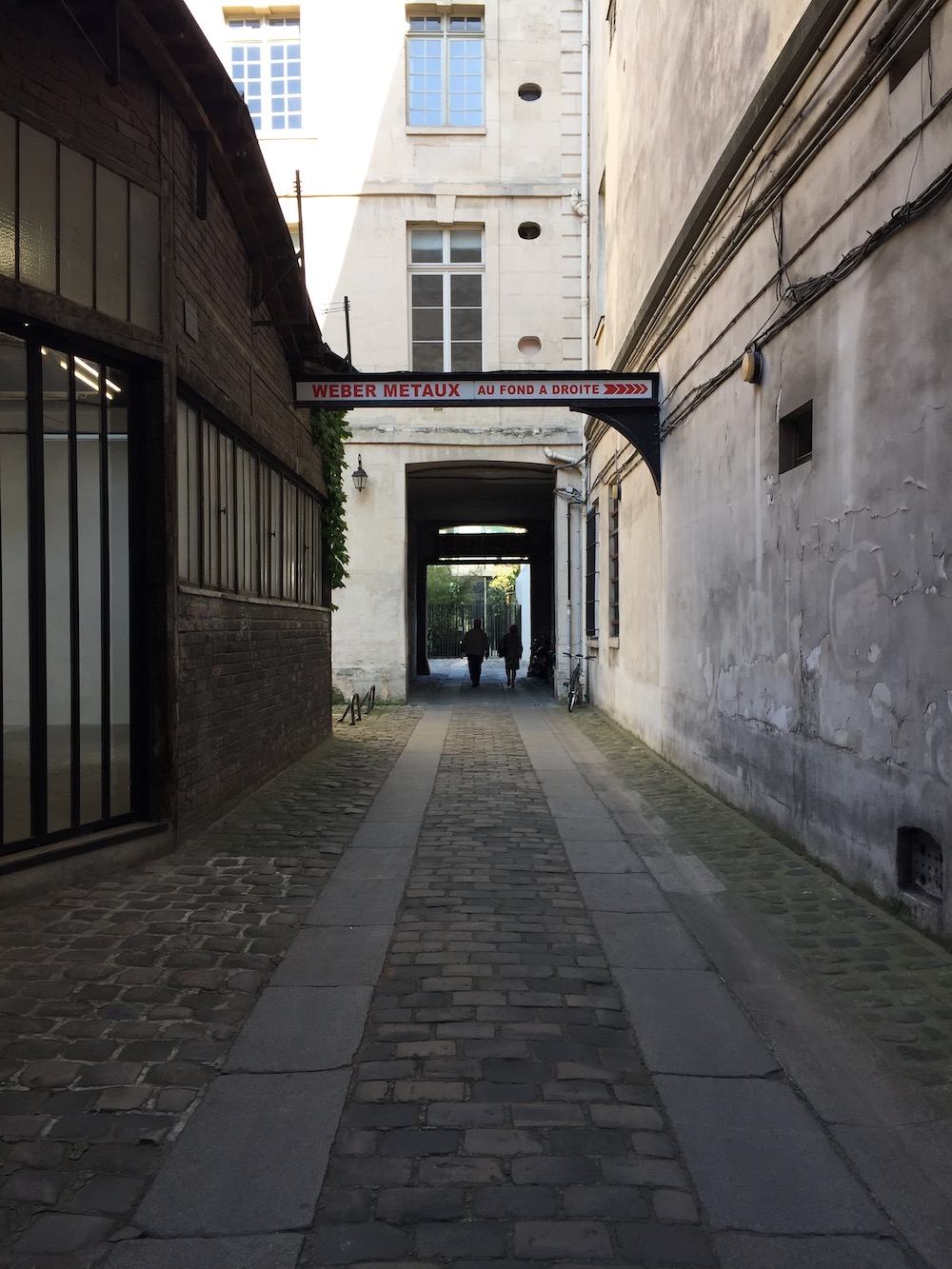 This whole scene is adorable: the gallery is the grey-black building on the left. And, amazingly, the metalworks being advertised on that cute sign is actually still based in this back alley in the Marais. Though how much longer it will last, in this enclave of designer candle and handbag shops, is an open question. Frank Elbaz has a buzzer in from the street, but no buzzer to the door of the gallery. The difficulty is raised a little, though, by the door handle being almost invisible and having no push/pull sign. 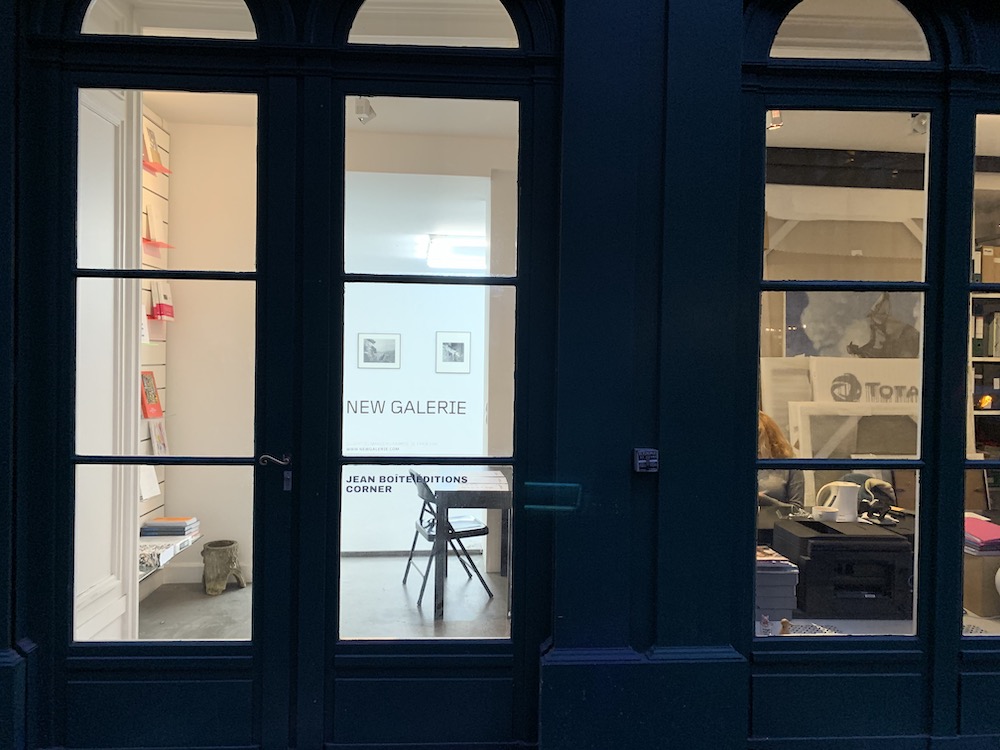 High on the list despite being open to the street because of a) its aggressively truncated opening hours and b) the murderous staircase to its basement, which requires the visitor to have both an excellent sense of balance and considerable calf strength. I think my ratio of visits during opening hours, according to the gallery’s listing on Google Maps, and the gallery actually being open, is about one in four. 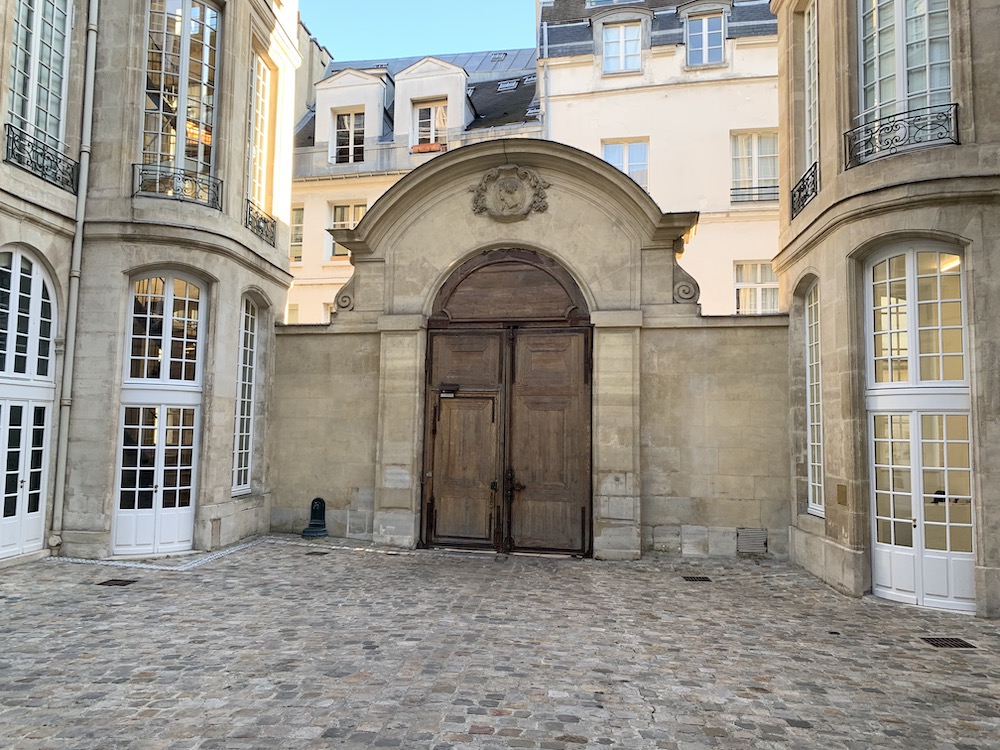 This door, this door! I’m calling it: this one is the final boss of Parisian gallery entrances, because the potential embarrassment factor, combined with difficulty of entrance, is so high. Look closely at the left-hand wooden door in the picture above. There’s a small wooden door-within-the-door, that needs a twist of the handle and hefty push to get in, assuming the gallerist inside has bothered to buzz you. You’ll forget that you need to pull it by the time you come back outside. Extra bonus points for the entrance being on the very busy Rue du Temple, meaning you run the risk of gaining an amused audience if you need to buzz repeatedly or struggle with the door.

But then, once inside, you can pat yourself on the back. You’ve made it, the final boss is defeated. Go and see some art! And maybe reflect on the fact that, if this really has been enough of a psychological burden that you might conceivably write a blog post about it in future then… you are blessedly unburdened. Assuming nothing really bad happens, like a global pandemic.