The beginning of the end of my 2016 came when I spent three days in Athens, alone. I went to the city with barely any preparation, beyond half-remembered Greek myths at school, an almost totally forgotten Homer course at university, a scrawled sheet of phrases (‘mee-LA-tay ag-lee-KA’?) and a cut-price air ticket for a midweek, mid-December getaway.

This lack of preparation turned out to be a good idea. Because everything came as a surprise.

First, the lividly bright winter skies – from gloomy London, it was as if somebody had turned on megawatt interrogation lamps that followed me as I walked. Then, the emptiness of the streets and the lack of other tourists: out of season, as almost every Greek I met reminded me, affronted I’d chosen to come when it was “so cold!”

And the decrepitude of the streets: years of concerned crisis-related news reports hadn’t prepared me for the uneven and missing pavements, graffiti and streetlamps strung down the middle of the road, seemingly just above head height. Though perhaps that was just the down-at-heel area in which I’d taken my dirt cheap Airbnb; I was there for three days, I didn’t really have time to explore much.

Actually, there were a couple of other surprises. The stray dogs wandering around the city’s downtown backstreets, or resting on the roadside. And, on the first morning, at the Acropolis, another stray. Guarding the Erechtheion, classical Athens’ holy of holies, a solitary tortoiseshell cat, who stood calmly before, during and after I took photos, and then stayed still: as if staring me out until I left. 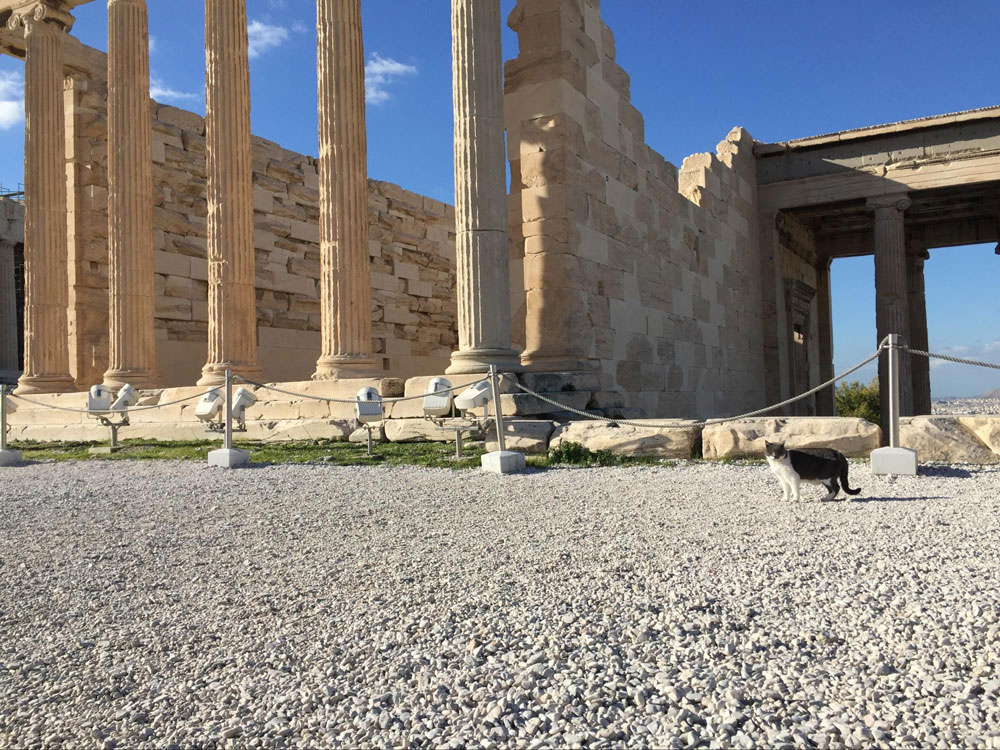 A larger tortoiseshell cat sat on the Acropolis’ silent north slope, looking back at the Parthenon overhead. Watchful and waiting; again, not moving until I’d moved off, and not flinching as I approached. Just not bothered either way. She’d seen so many of us come and go. 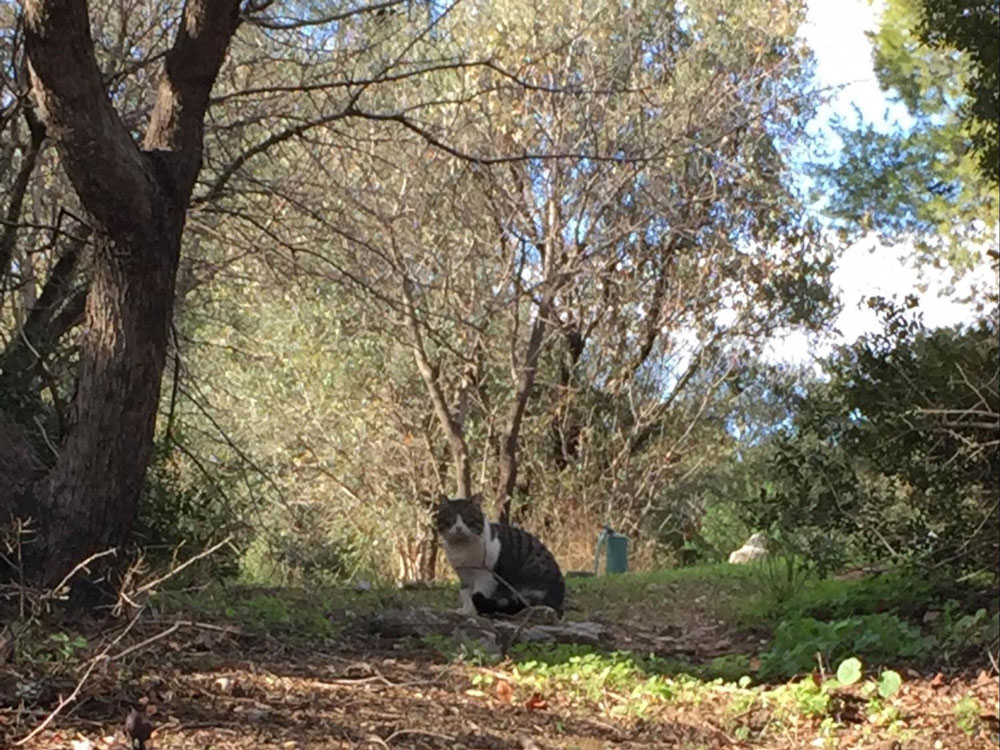 Down the hill at the ancient Agora, along the Panathenaic Way, curled watchfully against a millennia-old wall, a small black cat. Like his sisters on the hill, he seemed quite tame though wasn’t interested in being stroked, not even bothering to turn his head. He stalked away proudly when approached. 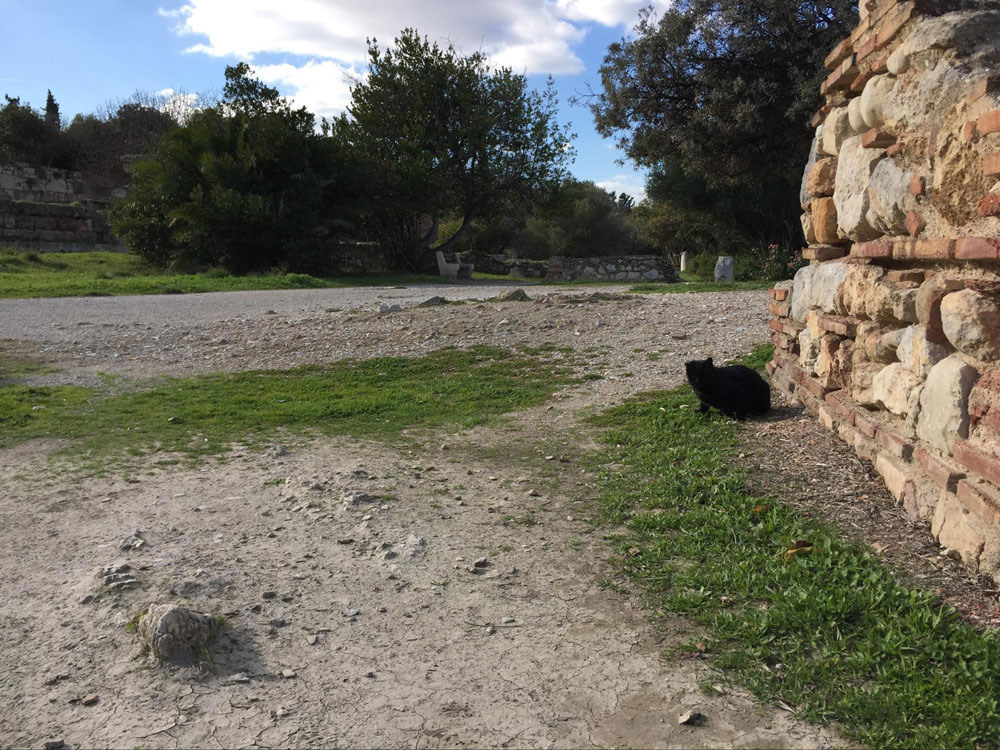 As I made my way from deserted ruin to deserted ruin, what first seemed a coincidence became a pattern. I started cat spotting.

Day two, at the Roman Agora, walking along the marble stumps of the central colonnade, another one. I think it was just me and him in the space at that point. Something about the proud and peremptory nature of his walk told me who was in charge. 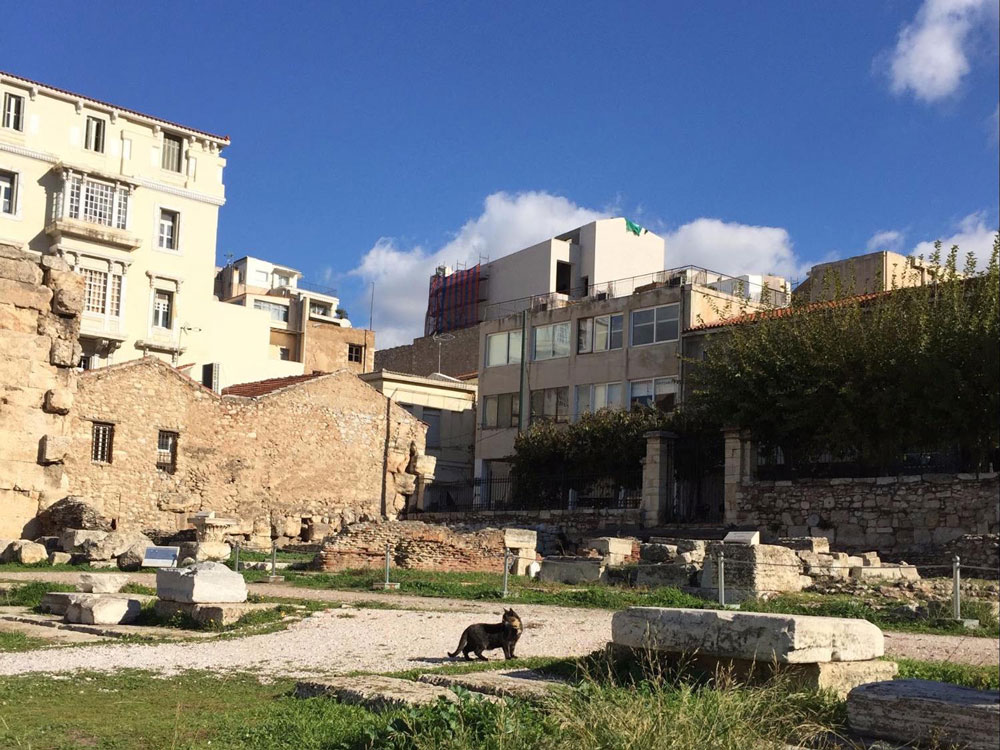 I started to think up a story, now that I’d established something mysterious was going on. Downtown was full of stray dogs, why weren’t they in the ruins too? And why didn’t I see any stray cats in the streets? Was this some kind of agreed-on division of animal labour?

Maybe the stray cats of Athens had actually reserved the city’s ancient sites for their own purposes. Guarding and maintaining the marble columns, passageways and steles, graciously sharing their workplace with the occasional human gawper. 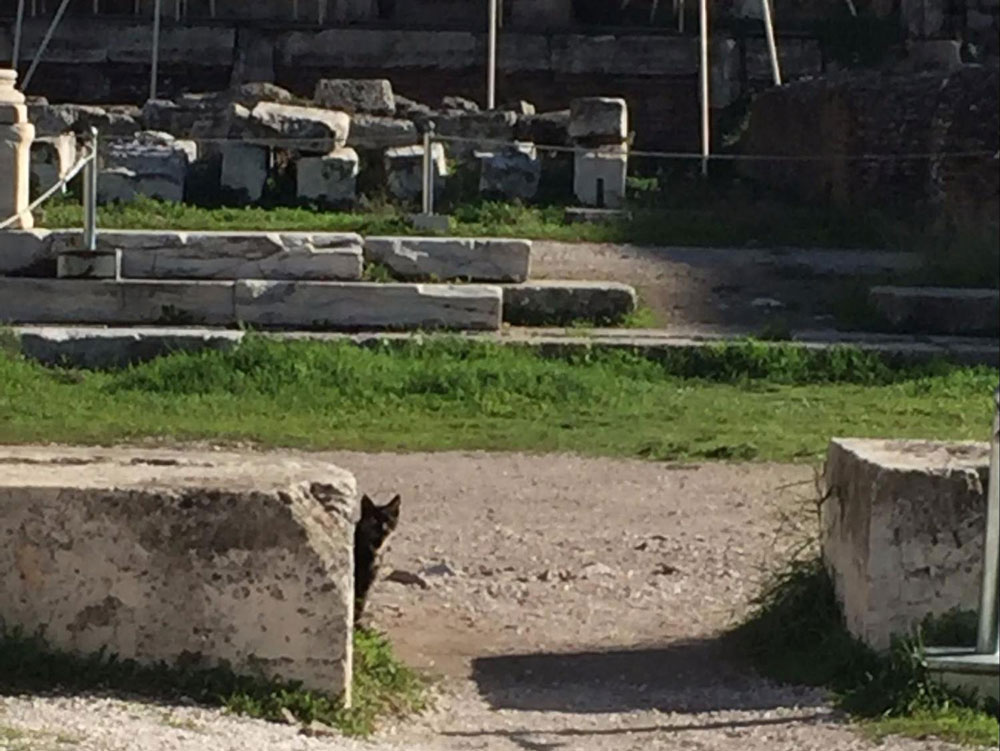 Peeping through the entryway of the Library of Hadrian, I saw a much more sprightly black cat – shyer than his colleagues at the city’s other shrines. The steps up to the library itself, on one side of the site, were grooved with thousands of years of footsteps over the threshold. Some of them feline.

And it wasn’t just the ancient sites that were protected. On the last day, at a much more modern ruin – the Technopolis, a decommissioned 19th century gasworks – another pair of cat guardians. 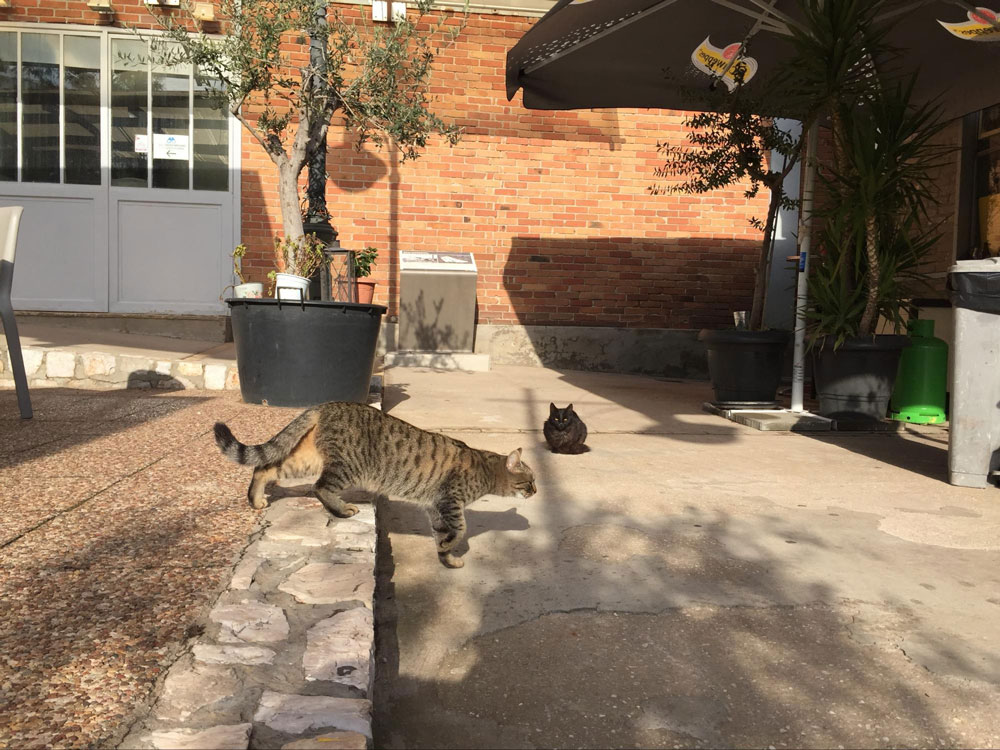 Though, to be completely honest, these two seemed more interested in the nearby cafe than in guarding the picturesque gas holders and factory buildings.

Back home, I tried to maintain this fond fiction when I told people about the trip. I even tried to write a cutesy blogpost about it above, ending with a smartypants link to ancient times, to tie in with my conceit about the cat guardians of the city’s ruined sites of worship and play. I didn’t really find anything, beyond a couple of mentions in Aristophenes’ plays, which contain both the superstition that a black cat crossing your path brings bad luck, and use “the cat did it” as an all-purpose phrase for avoiding blame. So what?

In fact, unlike the Egyptians before them, Classical Athenians were not major cat lovers. Many preferred to keep weasels as pets. So it’s just too much of a stretch even to fantasise that today’s cat guardians are paying homage to the doting builders of the ruins they prowl through each day.

Actually, it wasn’t as if I only ever saw cats in ancient ruins. There was this one at least, on the pedestrianised street outside the Kerameikos cemetery. 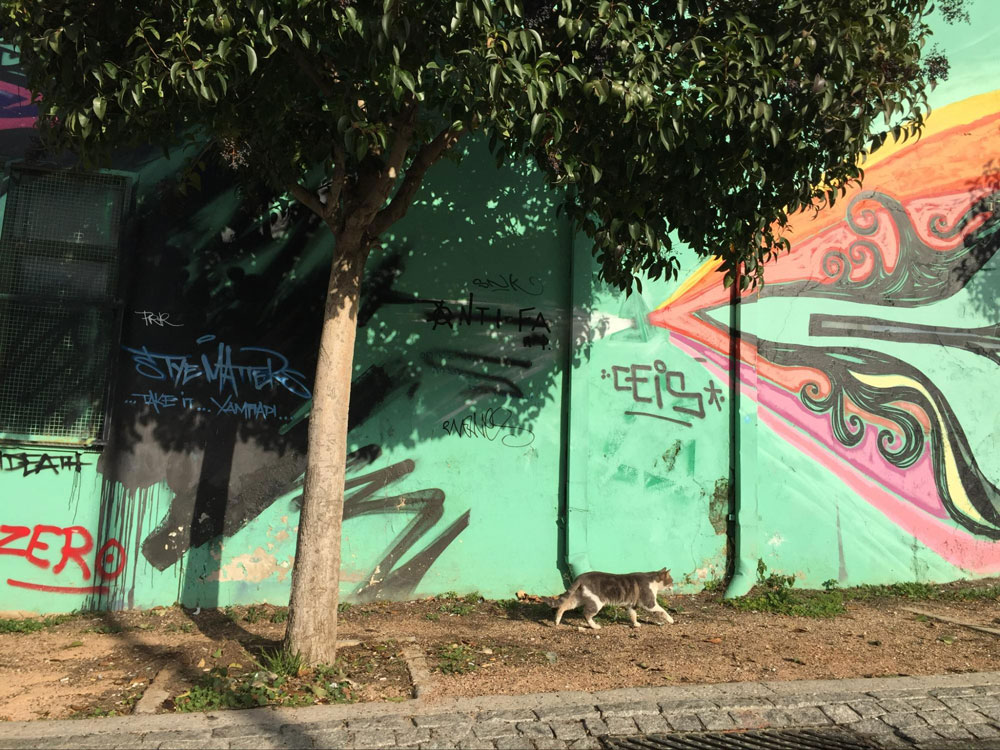 So, the conceit broke down. No neat phrase from an ancient play, first performed in the theatre of Dionysus, just down the Acropolis hill from when I saw that little tortoiseshell cat, to sum it all up.

Instead, what came inconveniently to mind, looking at these pictures, sat at my desk on a misty evening in London, the last of 2016, is a passage from an essay that has haunted me since I first read it. ‘Lost Cat’ by Mary Gaitskill is about so much more than the author’s rescue of a little stray she called Gattino. The bit of the essay I remembered comes just after she first picked him up, when she tries to explain her love for the animal to her “bemused” husband, who can only say ‘Oh no, Mary…’:

I would understand if he’d said it in a harsher tone. Many people would consider my feelings neurotic, a projection onto an animal of my own loneliness and fear. Human love is grossly flawed, and even when it isn’t, people routinely misunderstand it, reject it, use it or manipulate it. It is hard to protect a person you love from pain because people often choose pain; I am a person who often chooses pain. An animal will never choose pain; an animal can receive love far more easily than even a very young human. And so I thought it should be possible to shelter a kitten with love.

It wasn’t possible. Gattino runs away, or is stolen. And Gaitskill stayed kidding herself about the cat’s ability to receive love – and the human emotions she projected onto the poor animal.

Obviously, I wasn’t falling in love with these Athenian cats. But, just like Gaitskill, I was projecting onto them my loneliness and fear. As I neurotically wandered through the empty city, I reassured myself with stories. I built a fond fiction of a mysterious system of feline guardianship, maintaining the status of sites that have existed for thousands of years, and will hopefully exist for thousands more. Beyond that, maybe I found in these proud, still, silent creatures an image of continuity in a world that’s changing for all of us. A world that’s uncertain, that’s buffeted by crises: personal, financial and geopolitical. 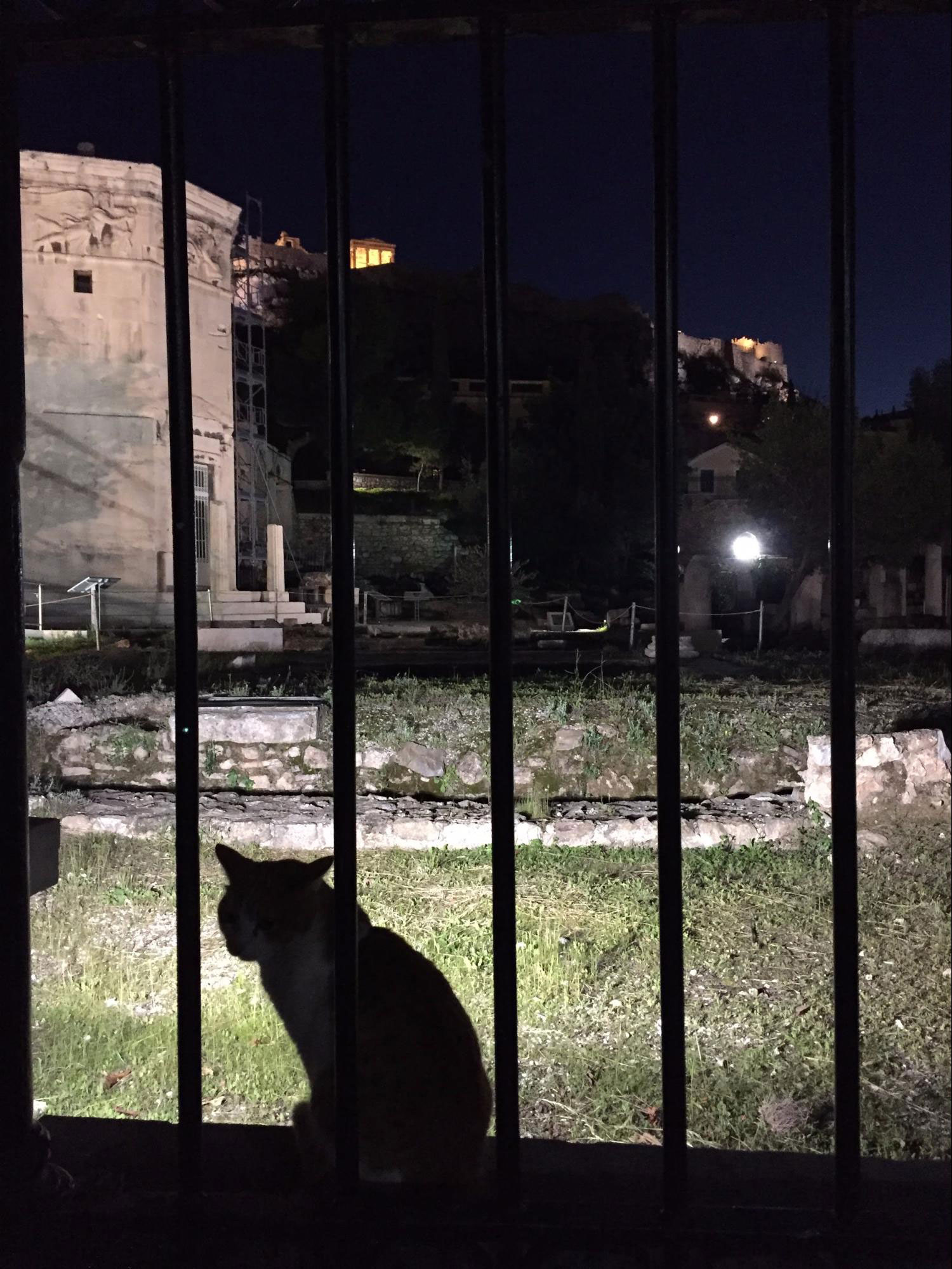 I know. How silly. I couldn’t find any decent cat references in Athenian drama, but I managed to create an Athenian drama of my own. Anyway, on my final evening, walking up from sleazy Monastiraki station and its flea market, a smartly-dressed middle aged man tried to pick my pocket, barging into my side. I hurried up the hill to the Roman Agora. It was late enough for the projector lights to have been turned on. The Tower of the Winds, a two thousand year old marble structure that began life as a clocktower, then became a church, then a mosque, and then a tourist attraction, was lit from below. And, silhouetted in front of it, one more small cat guardian, looking back at me down the hill.

It continued to stare as I knelt to take a photo, and didn’t flinch as I got back up. Silly conceit, but I felt like he knew something I didn’t.