Following a winter of what seemed like unbroken rain, there’s been a hint of spring in the air these past couple of weeks here in the UK. And the nicer weather’s been matched by increased optimism among both British economic and advertising forecasters. Official predictions for 2014 UK GDP growth were revised up to +2.7% earlier this week, suggesting that the economy will at last regain its pre-financial crisis peak this year. And official adspend forecasts show that growth’s running at an annual rate of +5.5%.

But what’s advertising’s actual contribution to broader growth? Recently, the AA’s been exploring these links. Advertising Pays, a Deloitte report commissioned by the AA and released in 2013, argued that each £1 invested in advertising pays back £6 in GDP; earlier this year, its follow-up, Advertising Pays 2, identified some potential drivers of future growth. 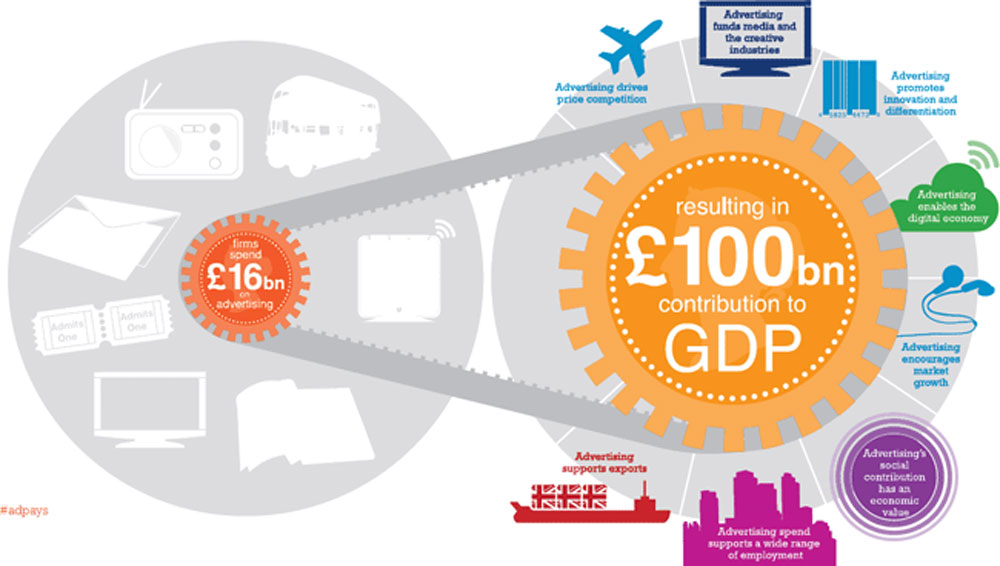 When I caught up with her in London last week, Karen Fraser, the AA’s strategy chief, gave me some background on these reports – starting with how small businesses remain perhaps Britain’s biggest untapped advertising opportunity.

Advertising Pays 2 suggests that small businesses account for a proportionally small share of overall adspend, relative to how many of them there are. What can be done to fix this?

One of the things that really surprised us when putting together the report was how much small businesses are underinvesting compared to turnover. Smaller businesses account for 40% of all UK private sector turnover, but just 18% of advertising spend. And one of the things we found in the report was the very high correlation between adspend, high turnover and high growth. So advertising can work really well for smaller companies – if used wisely.

Are you making the case for these small firms to invest in their brand, rather than small-scale, direct-response, search and social ads?

Absolutely. That completely chimes with what we found in the report. Advertising helps businesses grow faster – but when you have a structured campaign you are more likely to succeed. We found that 80% of the companies that had a structured, planned campaign reported success, compared to six in ten who were advertising in an ad hoc way. It’s the better way to go. However, that doesn’t mean that low-cost, ‘easy’ forms of advertising aren’t good. It’s a good thing that it’s easier for companies to advertise than before.

Should agencies be looking to target smaller businesses too?

I’ve heard in the past week of two large organisations that have set up units to deal with smaller companies – an incubator approach. Omnicom have a unit to identify small businesses – those poised for the most explosive growth – and working with them to develop appropriate campaigns. Channel 4 are developing an investment model where they can help a business to grow, then get the mutual benefit as the company grows more strongly. This is a really interesting new approach.

Advertising Pays 1 – released last year – suggested that each pound spent on advertising generates £6 for the economy as a whole. Is there more to say on making the broader economic case for advertising?

Making the economic case also supports the societal case – its benefits for people. Because without a strong economy we can’t really have a strong society. We all need economic activity in the country – we need jobs. So our work in Advertising Pays 1 found that over half a million jobs in the UK are supported by advertising. That’s not just jobs in advertising, it’s jobs in the companies that make sales that come off the back of advertising. So that’s a very high number of jobs. Those people pay their taxes and those taxes go back to supporting our society. So without advertising’s stimulus and a healthy economy, we can’t have an economy in Britain that we can say is healthy or robust.

How does this apply to other countries?

The really good news is that we’ve had nine countries now getting in touch about Advertising Pays and the approach that we used and at least two countries have commissioned their own report. One, the Republic is Ireland, has published already, and the other I better not say because the work is still under way! I’m really pleased – it’s a good feeling that others want to take a similar approach. And I’d be fascinated to see if they come up with the same multiplier of £1 to £6. I know that the Irish study has found a similar type of ratio.

Are there any cases that really stood out for you in the latest round of Advertising Pays research?

There were some smaller schemes that really stood out. Riverford Organic is an interesting example – I don’t know if you’ve heard of their veg box delivery scheme – but they used a campaign to promote a Christmas hamper they had for sale, and they had 2,000 extra visits to their website and sold out. And there’s another example on a much wider scale – Small Business Saturday, which was backed by AmEx and encouraged people to shop on their local high streets and use more independent retailers. [In the UK] that campaign generated more than £468m spent on the day.