Facebook has had one of the roughest months in its short history since becoming a public company, with lowlights ranging from a 16% decline in its stock price to media complaints about Mark Zuckerberg’s restaurant tipping habits. And things seemed to be going from bad to worse at the Cannes Lions International Festival of Creativity yesterday when Paul Adams, the firm’s global head of brand design, disappeared backstage soon after starting his keynote due to what seemed to be a bad case of stagefright.

But having taken a quick breather, Adams offered the audience a nice one-liner on his return to the stage – “That was the most anti-social thing I’ve ever done” – and went on to deliver a strong case for Facebook’s massive importance to marketers. After all, despite the negative headlines, the firm remains a global company with near-unparalleled reach, and is inexorably closing in on signing up its 1 billionth user. It’s also worth noting that the Facebook seminar was by far the most popular of the Festival so far among delegates, with queues to enter the conference room beginning to form half an hour before time… 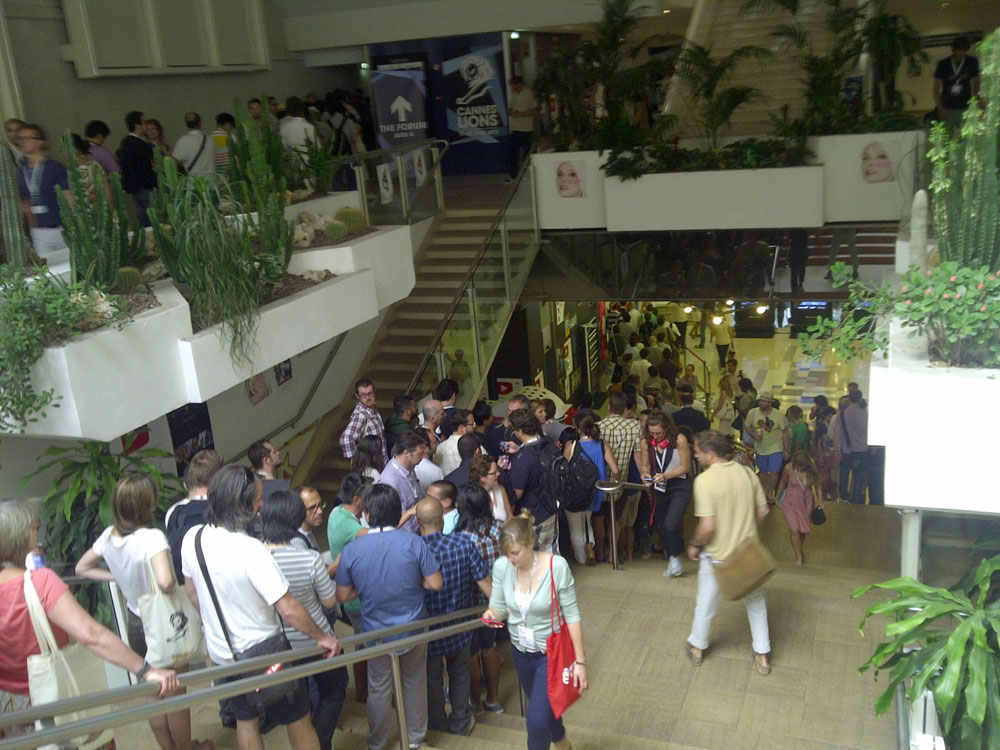 …and latecomers and double-bookers – including me – eventually relegated to watching a live stream of the speech in a distant annexe of the Palais (the main streaming room also being full).

Adams’ message was as big as the crowds that gathered to hear it. To him, marketers are just barely coming to terms with the impact online social networks have had on the internet. “It’s a transformational shift – social as a term is going to go away – when we think about the social web, that will just be the web. The same for social business. The same for social campaigns.” Quite a claim, especially coupled with Adams further suggestion, later in the speech, that the creation of the internet represents “the biggest transformational shift since the industrial revolution”.

The source of Facebook’s success has deep human roots, he continued. We are hard-wired to form groups, and “the thing that’s most personal to us is actually defined by the groups that we’re in… we’re born into a community”. From a marketer’s point of view, this argument implies that online social networks represent uniquely valuable media space. “Some people are going to look at the transformational changes – and see these things and embrace them – and go on to build incredible things,” Adams said. “Make sure it’s you and not just your neighbour.” But there was a measure of practical advice to go along with such grand exhortations. Adams had four specific tips for Facebook marketers:

There were still more upbeat messages on digital – if a little less on-stage drama – during YouTube’s seminar later in the day. To Lucas Watson, VP of global sales and industry marketing at the Google-owned online video platform, “there’s never been a better time to innovate in video”. And the primary reason for this is the site’s gigantic reach; as Watson pointed out, in perhaps the day’s most jaw-dropping datapoint, YouTube receives 4bn video views per day. Watson even suggested that agencies embrace the “heresy” of the skippable ad, suggesting that their remuneration would eventually be reshaped by mass adoption of the format. “I’m looking forward to the time when creative agencies start getting rewarded when people actually choose to watch their advertising,” he added.

Also on the panel was Damian Kulash, singer for US rock band OK Go – who are probably the single best example of an established act using viral video to stay popular in the digital age. The example below has racked up 17m views and counting.

The site proved a natural match with OK Go’s off-the-wall music video aesthetic – and the two have grown together over recent years. “We didn’t make these things and think ‘where can we put them’?” Kulash pointed out. “It evolved with the channel.” Today, OK Go are pursuing what ad people would call an integrated campaign strategy, currently working on TV shows and a “multimedia tour”, as well as the viral videos. And they even release music from time to time.

That said, Kulash was also quick to differentiate what he did with YouTube with making ads. For one thing, OK Go have launched legal action against a brand who, they say, ripped off one of their videos without permission. “We use YouTube to make something cool,” he added. “It’s not marketing – it’s what we make. We love making them and people love watching them.”